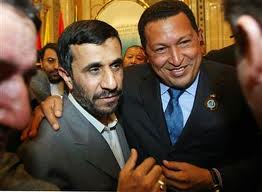 Senior Iranian clerics have criticized President Mahmoud Ahmadinejad for saying Venezuelan President Hugo Chavez will be resurrected alongside Jesus Christ and the hidden imam who Shi’ite Muslims believe will rise up to bring world peace.

Iran declared a day of national mourning on Wednesday after the death of Chavez, who shared the Islamic Republic’s loathing for what they both called U.S. imperialism.

Ahmadinejad was among at least two dozen leaders travelling to Venezuela to attend Chavez’s funeral on Friday.

In a condolence letter posted on his personal website on Wednesday, Ahmadinejad said he was certain that Chavez “will return” along with Jesus Christ and Imam Mahdi, who devout Shi’ite Muslims believe went into hiding in the 10th century and will reappear one day to spread justice in the world.

But Ahmadinejad’s comments angered some religious officials in Iran.

“The terms Mr Ahmadinejad used to describe the Venezuelan president are not appropriate for us,” the semi-official Mehr news agency quoted Ghorbanali Dorri Najafabadi, a cleric and a senior member of the Assembly of Experts, as saying.

“One can naturally send a diplomatic letter without getting into religious discussions,” hardline Friday prayer leader Ahmad Khatami was quoted as saying by Iranian media, adding that he believed Ahmadinejad’s decision to do so was wrong.

While the return of the 12th imam is a core Shi’ite belief, the issue of which mortal souls will return with him on resurrection day is rarely discussed in the Islamic Republic.

Ahmadinejad, whose second and final term in office ends in June, has increasingly fallen foul of more conservative elements within Iran’s establishment. Among their criticisms is that Ahmadinejad and his close allies are overly preoccupied with the return of Imam Mahdi.

Ahmadinejad and Chavez had sought closer ties between their geographically distant countries, although action on joint social and military projects often lagged behind their rhetoric.

Chavez died on Tuesday at age 58 after a two-year battle with cancer.

The United States had looked askance at Venezuela’s warm relationship with Iran, fearing that Caracas could give Tehran an economic lifeline as it struggles to stave off pressure from sanctions over its nuclear activities.

Iran denies seeking a nuclear weapons capability and says it has the right to develop its own nuclear fuel cycle under its membership of the nuclear Non-Proliferation Treaty.