Lebanon FM under fire over Syria 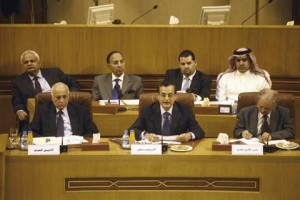 Lebanese Foreign Minister Adnan Mansour was  accused on    Wednesday  by former PM Saad Hariri of acting on behalf of  the Syrian regime  when he called for lifting    Syria’s suspension from the Arab League during the meeting of the Arab Foreign ministers in Cairo.

“What kind of a dissociation policy is this and who authorized him to speak on behalf of the Syrian regime” , Hariri was quoted as saying ” .

He asked: “Is he the Foreign minister of Lebanon or Syria ?”

“I call for Syria’s membership of the Arab League to be lifted,” Mansour told a League ministerial meeting. “Communication with Syria … is essential for a political solution.”

Lebanese Prime Minister Najib Mikati’s government is dominated by Hezbollah which has been supporting the Syrian regime in its crackdown against the uprising . Mikati according to observers cannot fire Mansour for disobedience because he is a member of the Amal party which is headed by Speaker Nabih Berri a key ally of Hezbollah.

Mikati, along with president Michel Suleiman have  sought to follow a policy of “dissociation” from the conflict in Lebanon’s dominant neighbor, but they are powerless since the Iranian backed Hezbollah militant group calls all the shots now in Lebanon , according to observers

One million refugees have fled Syria, piling pressure on its neighbors the United Nations refugee agency said on Wednesday. Lebanon, which  is hosting the largest number of Syrian refugees despite being the smallest country in the region is  struggling to support them.