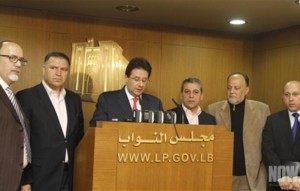 The Hezbollah led March 8 alliance MPs met in Nejmeh Square on Tuesday to criticize Prime Minister Najib Mikati and President Michel Suleiman’s decision to sign a decree calling on voters to participate in the parliamentary elections in June based on the 1960 electoral law if no consensus is reached on a new law.

“It is a black day in the history of [Lebanon’s] executive authority when the voters are called to participate in the elections based on the ‘dead’ law [in reference to the 1960 electoral law],” Change and Reform bloc MP Ibrahim Kanaan read in a statement issued by the March MPs following the meeting.

“We reject the adoption of the 1960 law… It will not be approved” , said Kanaan, who is a key member of the Free Patriotic Movement which is headed by MP Michel Aoun, a close ally of Hezbollah.

Kanaan also said that “overturning the joint commissions’ decision [to adopt the Orthodox proposal] is a dangerous precedent that threatens democracy.”

On Monday, Miqati signed a decree calling for the elections to be held on June 9, 2013, causing a stir amid political forces within the country.

Kanaan stressed that “statements saying that the Orthodox proposal will not be adopted is in anticipation of the current course of legislative action.”

The PM had said in a televised interview Monday that the cabinet did not study the Orthodox law and would not discuss it, adding that “it will not be adopted because it is unconstitutional.”

If no new electoral law is agreed upon, the June elections will be held under the auspices of the 1960 electoral law, which has been criticized by most Lebanese parties.

Suleiman also has said he would challenge the Orthodox plan before the Constitutional Council if it is approved by parliament, while Miqati stressed that the proposal will not pass, revealing that he has “ways to block it.”

In February, Lebanon’s joint parliamentary commissions approved the Orthodox law that calls for proportional representation and voting along sectarian lines. The law is supported by the country’s major Christian parties and top March 8 parties but is rejected by the Future Movement and Progressive Socialist Party as well as Mikati and Suleiman.

The cabinet approval in September 2012 a draft law based on proportionality and 13 electoral districts, but speaker Nabih Berri pronounced it today as “dead” and “orphan” and said that even PM Mikati is not defending it anymore.

The winner take all 1960 electoral law which calls for 26 electoral districts is favored by MP Walid Jumblatt and the Future Movement whic is headed by former PM Saad Hariri.

An Nahar quoted earlier on Monday parliamentary sources as saying that March 19 is the deadline to propose a new electoral draft-law or else other options will be on the table, including the technical postponement of the polls.