Lebanon to erect string of watchtowers on Syrian border 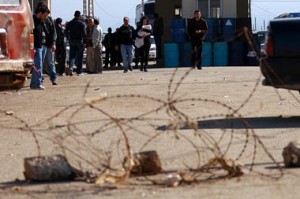 A series of fortified watchtowers manned by Lebanese troops will soon stud a line of hills along Lebanon’s northern border where Syrian artillery regularly trades fire with opposition rebels.

The 30-foot observation towers are intended to allow the Lebanese Army better control over the volatile border and to stamp the state’s authority over an area that has been increasingly treated as an extension of war-torn Syria, rather than sovereign Lebanese territory.

The watchtowers were provided by the British government in response to a request for assistance from the Lebanese Army and are based on the British military’s “Sangars” once used in northern Ireland and more recently in Iraq and Afghanistan.

“How Lebanon weathers the regional storm depends to an increasing extent on its army,” says Tom Fletcher, the British ambassador in Beirut. “The international community has realized that deft preventative diplomacy requires a much greater effort to support, train, and equip it. Construction of watchtowers on the border is a sign of how serious the threat of the Syria contagion has become, and demonstrates real intent to keep Lebanon out of the quagmire.”

Rebel fighters with the Free Syrian Army use parts of Lebanon’s northern Akkar Province to rest and regroup and to launch attacks against Syrian positions on the other side of the Kabir river valley, which marks the border.

In return, the Syrian Army routinely shells the Kabir valley and the edges of Lebanese villages, partly to deter militants attempting to slip over the border and partly to punish local Lebanese for harboring the rebels.

Lebanese troops deployed along the border often are caught in between the warring sides. If the army attempts to apprehend the Syrian militants, it risks incurring the anger of local Lebanese Sunnis who support the rebels. It is also powerless to halt the Syrian artillery bombardments.

While the new observation towers – a first for the Lebanese Army – are intended to demonstrate the authority of the state, they carry their own risks. Syrian troops on the other side of the border may resent the appearance of the towers and ask why the Lebanese have built them along the border of a country with long-standing close ties to Beirut and not along the southern frontier with Israel, with whom Lebanon is technically at war.

At the same time, the towers are likely to raise the suspicion of FSA militants who slip across the steep winding Kabir river valley to enter and exit Syrian territory. The towers could be vulnerable to attack if the rebel fighters believe that the Lebanese Army is using them to observe their clandestine movements.

Each tower will be constructed from six stacked shipping containers with the lower levels surrounded by Hesco blast barriers. The observation room at the top of the tower will be protected by bulletproof glass and surrounded by anti-missile fencing. Surveillance of the border will be conducted by remote-control long-range cameras equipped with night vision, allowing clear resolution images up to 12 miles away. All video footage is recorded and can be monitored from an operations room on the ground floor of the tower.

Work on erecting the first of four towers began on Feb. 25 with soldiers filling Hesco blast barriers with gravel in a small army position on the western edge of Menjez, a Christian village overlooking the Kabir river valley. Even as they toiled, a couple of distant artillery explosions could be heard, later reported to be shells striking the edge of Nourat al-Tahta village, two miles to the west.

Local reaction to the towers ranged from support to skepticism.

“It looks like this is going to be a long war,” says Rania Mikhael, a resident of Menjez, on being told that the observation tower was under construction. “I hope the towers can ease our fear.”

Mohammed, a barber in the border village of Abboudiyah, a proposed location for one of the towers, says that they should provide some reassurance.

“But if people continue to fire at Syria from this side of the border, it doesn’t matter what you put up, the Syrians will still shoot back,” he says.