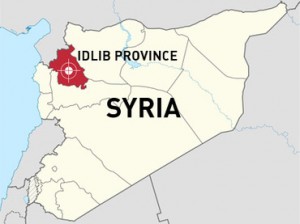 Beirut, Lebanon – More than 100 civilians have been abducted by armed groups in the Syrian province of Idlib in separate incidents, a watchdog said on Friday, expressing alarm over what it said were “sectarian kidnappings”.

The Syrian Observatory for Human Rights (SOHR) said the kidnappings in the northwestern province occurred on Thursday in two separate incidents.

A group of some 70 men and women passengers on four mini-buses were abducted near an army checkpoint when travelling towards the provincial capital, also Idlib, by pro-regime armed men, said the Britain-based Observatory.

It said the kidnappers were from the Shia-majority villages of Al-Fua and Kafraya, while the passengers hailed from the mostly Sunni villages of Saraqeb, Sarmin and Binnish

Hours before their abduction, in the same area, another armed group kidnapped at least 40 other civilians, mostly women and children, the Observatory said.

They had been travelling on a bus from Al-Fua and Kafraya villages, it said.

Most Syrian rebels fighting troops loyal to President Bashar al-Assad are Sunni, while the president’s clan belongs to an offshoot of Shia Islam.

“I fear a rise in sectarian kidnappings,” Observatory director Rami Abdel Rahman said. “Such acts are detrimental to the revolution.”

The United Nations says almost 70,000 people have been killed so far in the Syrian conflict, which first erupted 23 months ago on Mar 15, 2011, but US Secretary of State John Kerry said Thursday the death toll in Syria may have reached 90,000, citing figures given to him by his Saudi counterpart Prince Saud al-Faisal.