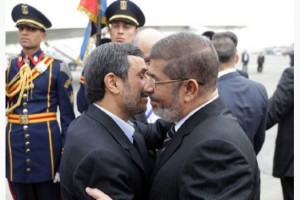 Iranian President Mahmoud Ahmadinejad’s visit to Cairo to attend a meeting of the Organization of Islamic States has sparked speculation that a warming trend in Iranian-Egyptian relations could realign Middle East alliances.

After all, this week’s historic trip not only follows Egyptian President Mohammed Morsi’s first visit to Iran, which took place last August when he attended the meeting of the Non-Aligned Movement, but also Iranian Foreign Minister Ali Akbar Salehi’s visit with Morsi in January. Both regimes claim inspiration from political Islam and presumably have a shared sympathy with the Palestinian cause.

The reality, though, is that their strategic interests are still worlds apart.

Diplomatic exchanges between Iran and Egypt were conspicuous by their absence for more than 30 years. After the 1979 Iranian Islamic Revolution, the new government in Tehran displayed great animosity toward Cairo for giving asylum to the deposed Iranian monarch, Shah Mohammed Reza Pahlavi. And as a key ally of the United States, former Egyptian president Hosni Mubarak shunned the Islamic Republic. Indeed, he often touted the strategic value of his government in keeping Islamists at bay, both at home and in the wider region.

When the Egyptian people demanded the overthrow of the western-backed Mubarak, the Iranian government relished the symbolic and historic irony that Mubarak fell in 2011 on the same date — Feb. 11 — that the Shah had been stripped of all power in 1979. Iran even took credit for Egypt’s Arab Spring revolution, preferring to call it an Islamic revolution. It claimed Mubarak’s overthrow was a defeat for western-backed governments in the Middle East and a victory for populist Islamists who took their cue from Iran. Thus for Ahmadinejad, the trip to Cairo has great symbolic value. He is the first Iranian leader to visit Egypt since the Islamic Republic was created and, to Ahmadinejad, the Egyptian revolution is his to claim.

But few Egyptians see their revolution as externally inspired. To them, it was a homegrown movement built on their socio-economic frustrations with a corrupt government. So while the Iranian press reported the warm reception extended to Ahmadinejad, the Egyptian press reported Morsi’s chiding of Iran for Tehran’s continued support for the Assad regime in Syria.

Similarly, while the Iranian press reported that Ahmadinejad wanted to foster unity with Egypt to further the Palestinian cause, the Egyptian press reported that both the head of the leading Sunni Islamic seminary of Al-Azhar and the Egyptian prime minister warned Ahmadinejad not to undermine security in the Persian Gulf region. These differences are not just rhetorical, but speak to the divergent strategic interests these leaders have in the region and at home.

Ahmadinejad is an outgoing president who will not be allowed to stand for a third term. But his desire to influence the June 2013 election is strong, illustrated by his manoeuvring to weaken his political adversaries. For their part, Ahmadinejad’s opponents blame him — his governing style and his policies — for some of the economic hardship the Iranian people have endured. One way for Ahmadinejad to deflect domestic attention from the flailing economy is to claim ownership of the revolutions sweeping the Arab Middle East.

Egypt’s Morsi needs to quell real public anger over his consolidation of power and the new contentious constitution. With a foreign exchange reserve that is rapidly dwindling and a deteriorating economy highly dependent on tourism and trade in the Suez Canal, Morsi is turning to Egypt’s wealthy benefactors in the Gulf — players like Saudi Arabia and Qatar — while continuing to receive $1.3 billion in military and economic aid from the U.S. Furthering an alliance with Iran would do little to tame Egypt’s domestic economic troubles. And with Egyptians firmly in support of the Syrian people’s desire to overthrow Assad, Iran offers Morsi little ideological comfort.

So beyond the warm exchange of greetings for the cameras, the icy relationship between these two historic powers in the Middle East remains. Morsi and Ahmadinejad’s shared Islamist political ideologies will do little to change the hard strategic realities — at home and in the region — that keep them apart.

A fellow at the Centre for International Governance Innovation and Brookings Institution, and a professor at the University of Waterloo.

Photo: Egyptian President Mohammed Morsi, right, greets Iranian President Mahmoud Ahmadinejad upon the lranian leader’s arrival in Cairo on Feb. 5, 2013. It was the first visit to Egypt by an Iranian president since Iran’s Islamic Revolution.