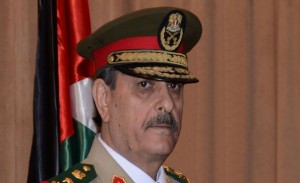 BEIRUT , Lebanon- Syria’s defense minister signaled Monday that his country won’t hit back at Israel over an airstrike inside Syria, claiming the Israeli raid was actually in retaliation for his regime’s offensive against rebels he called “tools” of the Jewish state.

The remarks suggest the regime’s military options might be severely constrained after 22 months of fighting an uprising that has depleted its weapons and stretched troops thin.

Israel has all but confirmed it was behind Wednesday’s airstrike – a humiliating raid just few miles away from the Syrian capital, Damascus, that added another layer of complication to a chaotic uprising and civil war. U.S. officials said the Israelis struck a military research center and a convoy next to it carrying anti-aircraft weapons destined for the Islamic militant group Hezbollah in neighboring Lebanon.

Syria vowed to retaliate, but the threats of retribution were seen by many as exceedingly mild, drawing criticism and mockery from rebels and opposition leaders who called it proof of President Bashar Assad’s weakness and acquiescence to Israel.

In a televised interview Monday, Syrian Defense Minister Gen. Fahd Jassem al-Freij indicated that Syria may not be planning to retaliate at all. He said Israel attacked the research center near Damascus because rebels were unable to capture it. He called the rebels Israel’s “tools.”

He was asked by Syrian state TV why Damascus does not retaliate against Israel.

“The Israeli enemy retaliated. When the Israeli enemy saw that its tools are being chased and did not achieve any (of their) goals, they interfered,” he responded. “It was a response to our military acts against the armed gangs,” al-Freij added. “The heroic Syrian Arab Army, which proved to the world that it is a strong army and a trained army, will not be defeated.”

In surprisingly candid remarks, al-Freij said that rebels have made Syrian air defenses across the country a focus of their attacks over the past months, attacking some with mortars while attempting to seize others in order to incapacitate them.

In response, he said the Syrian leadership decided to station them all in one safe place, leading to “gaps in radar coverage in some areas.”

“These gaps became known to the armed gangs and the Israelis who undoubtedly coordinated together to target the research center,” he said.

He suggested the army was overstretched and finding difficulty retaining control over several positions across the country, adding they had to abandon some areas to minimize casualties.

Ahmad Ramadan, a member of the opposition Syrian National Council executive bureau, dismissed accusations by Syrian leaders that the Israelis were doing the rebels’ bidding.

He also told The Associated Press that the military was using the research center to direct battles against rebels in the suburbs of Damascus. He said the area has witnessed clashes between troops and rebels but that the rebels had not attacked the center itself.

In his first comment on the airstrike, Assad said Sunday that that his country would confront any aggression.

“Syria, with the awareness of its people, the might of its army and its adherence to the path of resistance, is able to face the current challenges and confront any aggression that might target the Syrian people,” the president was quoted as saying by the state news agency SANA during a meeting with a top Iranian official.

But analysts say the Syrian military should be cautious about overreaching, noting that morale is sagging among many soldiers.

“It would be illogical for the regime in Damascus to engage in an adventure with the Jewish state which would further weaken it and hasten its collapse,” wrote George Semaan, a leading columnist in the pan-Arab Al Hayat daily Monday.

A top Iranian official visiting Damascus said Monday that Israel will regret its “latest aggression” on Syria and urged the entire Muslim world to be ready to defend the Syrian people.

“Just as it regretted its aggressions after the 33-day, 22-day and eight-day wars, today the Zionist entity will regret the aggression it launched against Syria,” Saeed Jalili, the head of Iran’s National Security Council, told a news conference in Damascus. He was referring to past wars between Israel and Hezbollah or the Palestinian Hamas rulers of Gaza.

Israel has been growing increasingly concerned that Assad, fighting a civil war with rebels who want to overthrow him, is losing his grip on power and on his country’s arsenal including chemical weapons.

The strike was apparently meant to prevent Syrian and Iranian ally Hezbollah from acquiring more sophisticated defenses that could have limited Israel’s ability to gather intelligence on its enemies from the air.

For years, Israel has been charging that Assad and Iran have been arming Hezbollah, which fought a monthlong war against Israel in 2006.

Still, the airstrike was criticized by some countries vehemently opposed to the Assad regime.

“Those who have from the very beginning looked in the wrong direction and who have nourished and raised Israel like a spoiled child should always expect such things from Israel,” Turkey’s Hurriyet Daily News quoted Erdogan as saying.

Photo: Fahed al-Freij was promoted to replace Syria’s defense minister who was slain in a bomb attack last year. A staunch Assad supporter, is known for brutality and shoot-to-kill tactics.