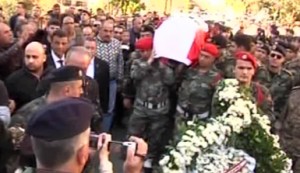 The Beqaa town of Mreijat in east Lebanon bid its last farewell to its son, late LAF Major Pierre Bachaalany who was killed in Arsal, holding a funeral for him at the town’s St.Georges Church in the presence of a large crowd, political and military officials.

During the funeral, the father of Bachaalany called on President Michel Suleiman to enforce zero tolerance with criminals and to punish all those who dare to undermine security with an iron fist.

Relatives, friends, neighbors and supporters of the Lebanese Army participated in the funeral and demanded the prosecution of the killers.

Bachaalany and Zahraman were killed on Friday when unidentified gunmen attacked a Lebanese Army patrol in the border town of Arsal.

Kahwaji condemned on Sunday the Arsal clashes, while saluting the two slain officers.

He said in a statement: “We reject any attempt to make light of the gravity of the premeditated crime committed against the army.”

“Those who believe that our combating of terrorism will halt for any local or regional power are mistaken,” he declared.

“We will not accept a political compromise at the expense of the blood of martyrs Pierre Bashaalani and Ibrahim Zahraman,” he added.

“No matter what the cost, the army will not waver in apprehending the criminals, regardless of their identities or affiliations,” Kahwaji stated.