Death toll climbed to 37 in Egypt after court verdicts 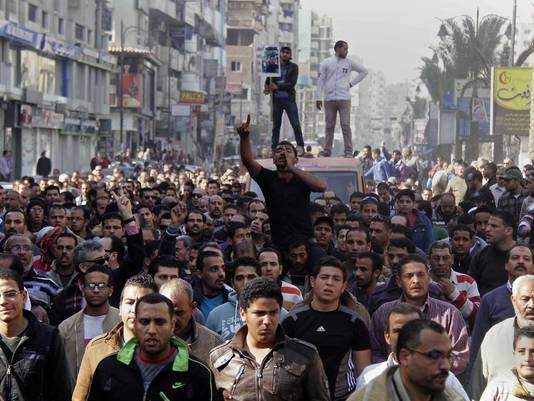 The death toll climbed to 37 in Saturday’s riots in the northern city of Port Said after an Egyptian court handed down 21 death sentences in connection with last year’s deadly soccer melee.

At least 300 have been injured, local media reported, in ongoing clashes between security forces and protesters who are angered by the verdicts related to a February brawl in which 74 soccer fans were killed .

President Mohammed Morsi canceled a scheduled trip to Ethiopia on Saturday and instead met for the first time with top generals as part of the newly formed National Defense Council.

The military was deployed in Port Said to try to restore stability, but assaults continued into the evening.

Saturday’s unrest was the latest in a bout of violence that has left a total of 48 people dead in two days, including 11 killed in clashes between police and protesters marking Friday’s second anniversary of the uprising that ousted longtime leader Hosni Mubarak.

The clashes broke out as protesters demonstrated against the Muslim Brotherhood and Morsi amid widespread calls for change and growing charges of injustice.

“Egyptians are very worried about what is happening because they feel the country is getting into a very difficult situation,” said Said Sadek, professor of political sociology at the American University in Cairo.

Immediately after Saturday’s verdict was read live on state TV, two policemen were shot dead outside Port Said’s main prison when angry relatives tried to storm the facility to free the defendants. Police fired tear gas and rubber bullets, as well as live rounds, at the crowd outside the prison.

In other parts of the city, residents tried to storm the governor’s office, police stations, the power station and the main court building. Residents occupied one police station in the east of Port Said.

The director of hospitals in Port Said, Abdel-Raham Farah, said two local soccer players were shot to death Saturday as they were apparently on their way to practice. He identified them as Mahmoud Abdel-Halim al-Dizawi, who played for the city’s Al-Marikh club, and Tamer al-Fahla, who used to play for the city’s main Al-Masry team. Al-Diwazi was shot three times, the doctor said.

Egypt has witnessed a slew of violent incidents over the past two years amid a weakened security situation, a deepening polarization between political groups and an economic situation that has left many severely struggling.

“Any revolution is like an earthquake, with aftershocks,” Sadek said. “So we have aftershocks continuing from time to time, and the country will be very unstable for at least four to five years.”

There are local sensitivities in the city, located on the Mediterranean coast, said political analyst Mazen Hassan, including intense rivalry between soccer fans, economic suffering and feelings that people are deprived of the services they believe they deserve.

“Egyptians now have minimum respect for rule of law,” Hassan said. “It will be very difficult for them to accept verdicts that they see as unjust, especially when it comes to Port Said.”

“It is coming from an area in the country that has a strategic significance because it overlooks the Suez Canal,” Hassan said. “That has the potential of not only national but also international repercussions.”