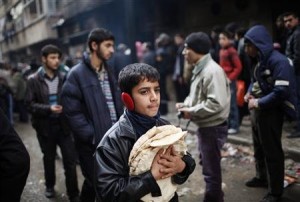 ALEPPO, Syria – At a crowded market stall in Syria, a middle-aged couple, well dressed, shuffle over to press a folded note, furtively, into the hand of a foreign reporter.

It is the kind of silent cry for help against a reign of fear that has been familiar to journalists visiting Syria over the past two years. Only this is not the Damascus of President Bashar al-Assad but rebel-held Aleppo; the note laments misrule under the revolution and hopes Assad can defeat its “terrorism”.

“We used to live in peace and security until this malicious revolution reached us and the Free Syrian Army started taking bread by force,” the unidentified couple wrote. “We ask God to help the regime fight the Free Syrian Army and terrorism – we are with the sovereignty of President Bashar al-Assad forever.”

While they might not be all they seemed – agents of Assad’s beleaguered security apparatus want to blacken the rebels’ name – their sentiments are far from rare in Aleppo, Syria’s biggest city and once vibrant hub of trade and industry, whose diverse urban communities now face hardship and chaos at the hands of motley bands of fighters recruited from surrounding rural areas.

As government forces fight on in parts of Aleppo, in large areas that have been under rebel control for six months or more complaints are getting louder about indiscipline among the fighters, looting and a general lack of security and necessities like running water, bread and electricity in districts that have been pounded by tanks and hit by Assad’s air force.

Recognizing that mistrust, rebel units have set up command and policing structures they see forming a basis of institutions which might one day run the whole country and which, meanwhile, they hope can show Arab and Western supporters that they have the organization to handle aid in the form of money and weapons.

For those who fear the worst for Syria now that the revolt has unleashed long suppressed ethnic and sectarian rivalries, however, evidence in Aleppo that these new institutions have had little practical impact on often rival rebel groups is ominous.

And all the while relations grow testier between the rebels and Aleppines, for whom many fighters harbor some disdain after the urbanites’ failed to rise up on their own against Assad.

Rebel commanders interviewed in and around Aleppo in the past two weeks acknowledged problems within the FSA – an army in name only, made up of brigades competing for recognition and resources. But they laid much of the blame on “bad apples” and opportunists and said steps are being taken to put things right.

“There has been a lot of corruption in the Free Syrian Army’s battalions – stealing, oppressing the people – because there are parasites that have entered the Free Syrian Army,” said Abu Ahmed, an engineer who heads a 35-man unit of the Tawheed Brigade, reckoned to be the largest in Aleppo province.

Abu Ahmed, who comes from a small town on the Turkish border and like many in Syria would be identified only by the familiar form of his name, estimated that most people in Aleppo, a city of over two million, were lukewarm at best to a 21-month-old uprising that is dominated by the Sunni Muslim rural poor.

“They don’t have a revolutionary mindset,” he said, putting support for Assad at 70 percent among an urban population that includes many ethnic Kurds, Christians and members of Assad’s Alawite minority. But he also acknowledged that looting and other abuses had cost the incoming rebels much initial goodwill.

“The Free Syrian Army has lost its popular support,” said Abu Ahmed, who said the Tawheed Brigade was now diversifying from fighting to talking on civic roles, including efforts to restore electricity supplies and deal with bread shortages. His own wife was setting up a school after months without classes.

Hunger and insecurity are key themes wherever Aleppines gather this winter. Outside a busy bakery in one rebel-held neighborhood men complained of having to stand in line for hours in the hope of bread, and of feeling the need to arm themselves for their own protection on the streets of the city.

Schools are being stripped of desks and chairs for firewood.

Lieutenant Mohammed Tlas, like many FSA officers, defected from Assad’s army. He now commands the 500 men of the Suqoor al-Shahbaa Brigade and put civilian complaints down to “bad seeds” who can label themselves as FSA fighters without any vetting.

“There are some brigades that loot from the people, and they are fundamentally bad seeds,” he said, chain-smoking in a green army sweater as he sat at his desk in a spartan office. “Anyone can carry a rifle and do whatever he wants.”

But concern about fighting other anti-Assad units holds Abu Golan back from trying to contain abuses, for now: “Are we going to be fighting Bashar and them?” Tlas asked of untrustworthy new fighters. “There’s a lot of that in Aleppo … We cannot reject them. It’s not the time for that. Those are the bad seeds.”

Many rebel commanders have a low opinion of their fellows. Abu Marwan, a uniformed young air force pilot leading a long siege of a government air base, described another rebel leader as running his brigade as a personal fiefdom, ignoring any semblance of military hierarchy by promoting his favorites.

“It was like the regime all over again, wanting only their own family or sect to rule,” he told Reuters as a walkie-talkie cackled nearby. “After the regime falls, we still have a long battle just to clean up the revolutionaries.

“There are a lot of parasites.”

Some rebels in Aleppo have formed what they call a military police force to try to stop abuses. Headed by another defector, Brigadier-General Zaki Ali Louli, it is funded by the Tawheed and Mohamed Sultan Fateh brigades, Louli said, and aims to coordinate with others. He declined to say how many men he had.

“We’re in the final stage of the revolution and the tyrant Assad regime is fading,” he said in a sprawling police building where rebels in army fatigues worked in offices. “We have set up institutions that in the future will become the administration,” he added of his hopes for a post-Assad role for his unit.

“In each regiment, there’s a police officer whose responsibility is to observe the revolutionaries and tell us about all their observations within that regiment,” he said, as he stamped paperwork. They pay particularly close attention to those who join up “on the pretence that they are fighters”.

Sometimes, Louli said, “through observing them it becomes obvious to us that they are anomalous”. On the alert for agents of Assad, the rebels’ military police is quick to remove those it does not trust, and also vets new defectors from the army.

A sister institution deals with complaints from Aleppo civilians, said Louli, adding that he was in talks to spread that organizational model nationwide.

Such hopes for national structures reflect similar moves in the overall command of the opposition movement. After a National Coalition was formed abroad in November with Arab and Western backing, an Islamist-dominated military command was set up last month to oversee operations against Assad’s forces inside Syria.

Accounts differ on how effective the new structure is but rebel leaders say there is a clearer chain of command than before, and rebel groups are more aware of who is in charge of which sectors within Aleppo and the surrounding countryside.

Lieutenant Tlas, whose Suqoor, or Falcons, brigade has been in the thick of fighting in the city, says the rebel forces now have a combined operations room and hold weekly meetings for all brigades, as well as daily gatherings of frontline commanders.

“Basically a ministry of defense has been created. A force for Syria,” he said. “But this force needs weapons and money.”

That is a common refrain among those fighting Assad, and reflects frustration at hesitation among Western powers in particular to aid rebel groups whose wider goals are unclear.

The United States has branded one rebel force a “terrorist” organization, accusing it of links to al Qaeda. Most Islamist fighters – including Tlas, who sits beside a black flag bearing a religious slogan – have declared loyalty to the Western-backed National Coalition. But allies in the West remain suspicious.

While there are arms coming in from abroad, most rebels complain of a lack of weapons and a chronic shortage of ammunition, which has hampered their advance on several fronts.

Tlas said he been told that only a few thousand bullets had reached rebel forces in Aleppo province in one month and sources of revenue were drying up. In desperation, some leaders have sought out wealthy Gulf Arabs to fund their revolt.

One Kuwaiti businessman met Tlas: “He came on a tour, we showed him the different fronts, immersed him in the atmosphere of a war zone and even let him fire a rifle,” he said. “He left here really happy. I thought … he would solve everything.

“And we never heard back from him. Maybe he got scared of the rifle. That was about a month and a half ago.”

As the war grinds on, and despite efforts by some commanders to create a semblance of order, some Aleppines are growing impatient with the Free Syrian Army: “We don’t care about the regime,” said 48-year-old Abu Majid, who worked in one of Aleppo’s many textile factories. “We need peace and security.”

Sitting on a plastic chair in the middle of a busy market on Thirtieth Street, Abu Majid held the rebels responsible for desperate conditions in the city: “We’ve gone back to the Stone Age. The Free Syrian Army must get an organized leadership.

“At the beginning people rallied behind them; now they’re alienated from the rebels.”

Tlas, who comes from central Syria, and other rebel commanders in the northern city bristle at such complaints, saying their men, too, are short of bread and power.

Of Aleppo’s civilians, Tlas said: “They think the Free Syrian Army owns everything or that it can substitute a state.”

While many people in Aleppo still say they, too, want rid of Assad, the rebels’ inability to bring order or to improve the miserable conditions of the city, an ancient jewel of the Arab world now ravaged by 21st-century war, is losing them support.

“After it gained an international reputation for being an army that is fighting for the Syrian people, for Syria, all this stuff, these people, has diminished the value of the Free Army.”