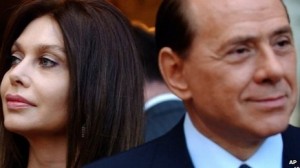 Berlusconi will keep the $100m villa where the couple lived with their three children, as part of a divorce deal reportedly filed on Christmas Day.

Ms Lario left Berlusconi in 2009 after he was seen at the 18th birthday party of an aspiring model, Noemi Letizia.

US magazine Forbes estimated his wealth at almost $6bn in March.

The Corriere della Sera newspaper reported that Ms Lario, 56, had initially asked for $56m a year.

Her 76-year-old ex-husband reportedly offered her about $5m.

The couple met in a dressing room in 1980 after Berlusconi saw Ms Lario perform in a Milan theatre.

He has two other children from his first marriage and is currently engaged to 28-year-old Francesca Pascale .

Berlusconi was Italy’s longest-serving post-war prime minister until he resigned in November 2011.

His third term in office saw slow growth and a national debt of $2.6 trillion and his government was slow to implement austerity measures in response.

He also became embroiled in a series of financial and sex scandals.

In October 2012, he was sentenced to four years in jail by a Milan court after being convicted of tax evasion.

He is currently appealing against the decision, and commentators say it is unlikely that he will serve any time in jail.

He is also standing trial on charges of paying to have sex with an underage girl in 2010.

Her identity was later revealed as Karima El-Mahroug, widely known as Ruby Rubacuori (heart-stealer), a Moroccan nightclub dancer who was 17 years old at the time.

He is also charged with abusing his powers to get Ms Mahroug released from police custody after she was arrested for shoplifting.