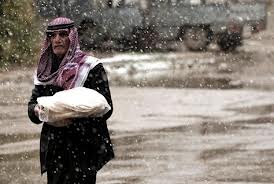 International envoy Lakhdar Brahimi has called for “real change” in war-torn Syria and the installation of a transitional government with full powers until elections can be held.

The envoy unveiled his initiative in Damascus on Thursday as Russia, the most powerful ally of Syria’s government, denied the existence of a joint peace plan with the United States, amid a flurry of year-end diplomatic activity on the crisis.

“Change should not be cosmetic; the Syrian people need and require real change, and everyone understands what that means,” the UN-Arab League envoy said on the fifth day of his latest peace mission to Syria.

“We need to form a government with all powers… which assumes power during a period of transition. That transition period will end with elections,” Brahimi told reporters.

He did not specify a date for the envisaged elections, either presidential or parliamentary depending on what could be agreed. He also made no mention on the fate of President Bashar al-Assad, whose current term expires in 2014.

“The transition period should not lead to the collapse of the state and its institutions,” Brahimi said, adding the initiative was incomplete.

“We prefer… a project whose facilitation the parties have agreed upon, and, if they do not, the last solution is going to the (UN) Security Council which will make a binding resolution.”

Brahimi, who while in Damascus has held talks with Assad as well as with opposition groups tolerated by the regime, replaced former UN chief Kofi Annan after his dramatic resignation in August over what he said was the failure of major powers to back his own six-point peace plan.

And a diplomat at the UN Security Council said on Wednesday the veteran Algerian troubleshooter had received no support from either side since arriving in Syria on Sunday.

“Assad appears to have stonewalled Brahimi again, the UN Security Council is not even close to showing the envoy the kind of support he needs and the rebels will not now compromise,” said the diplomat.

Brahimi is to hold talks on Saturday with Moscow at the request of the envoy, Russia’s foreign ministry said.

Russia on Thursday hosted a Syrian delegation led by Deputy Foreign Minister Faisal Muqdad, with its foreign ministry saying the results would be announced later in the day.

“This is of course a part of the efforts we are undertaking to encourage dialogue not just with the government but all opposition forces,” spokesman Alexander Lukashevich said.

Moscow has to the fury of the West refused to cut cooperation with the Assad regime in the conflict.

The diplomatic drive comes amid Western media reports of a new Russia-US initiative that would see Assad stay in power until 2014 while preventing him from further renewing his mandate.

But Lukashevich vehemently denied this.

“There was not and is not such a plan and it is not being discussed,” he said, adding Russia’s Syria policy was still based on an accord with world powers made in Geneva back in June for an inter-Syrian dialogue.

Brahimi too denied such a plan has been devised, saying he had only “proposed” and “wished” there was an agreement between the Americans and Russians.

Russia has always insisted it will not prop up Assad but has also emphasised Moscow will not seek to persuade him to step down, saying it is up to Syrians to decide their country’s future.

Photo: Syrian forces loyal to president Basah Al Assad have bombed and fired artillery at or near at least ten bakeries in Aleppo province over the past three weeks, killing and wounding dozens of civilians who were waiting for bread, Human Rights Watch said.