Syria’s christians’ in no mood to celebrate Christmas’ 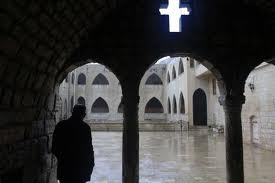 Festive spirit is a distant memory for Syria’s Christian minority as it faces a second Christmas in the grip of fear of daily violence and the spectre of rising Islamism.

“We’re in no mood to celebrate Christmas this year. Everyone around me is so sad, and the situation is terrible,” said George, a 38-year-old accountant from Damascus, who, like many in Syria after 21 months of bloodshed, asked not to give his full name.

“How am I going to celebrate now that many of my relatives have fled, and we have lost our loved ones? This Christmas doesn’t look anything like a celebration.”

Syria’s 1.8 million Christians make up some five per cent of the population.

Many have tried to remain neutral in the country’s spiralling conflict. Others have taken President Bashar Al Assad’s side, for fear of the Islamists in rebel ranks.

“Foreign fighters are coming to Syria to impose their religious and political views in our country,” said Mariam, who lives in central Damascus.

“These armed terrorists might force me to wear the veil, stop working and stay home,” she said.

It was similar fears of daily violence and hardline Islamism that prompted a huge exodus of Christians from neighbouring Iraq in the years after the US-led invasion of 2003 and Syrian church leaders have appealed to their flocks not to take the road of emigration. But many are voting with their feet.

Engineer Nadine, 40, has applied for a visa for the US, where her mother and several other family members live. “I see no solution to the conflict,” she said.

In Qasaa, a majority Christian neighbourhood of Damascus, the streets are bare of the Christmas decorations that adorned them in years gone by.

The shops are also largely empty. With the daily bloodshed has come mounting economic hardship.

Consumer prices have jumped by up to two-thirds this year, driven by deteriorating security, increased transport costs and a sharp fall in the value of the Syrian pound, a pro-regime daily reported late last month.

“I haven’t even been able to buy gifts and toys for the children,” said Bassem, another Christian from Damascus.

“This is the second Christmas we are spending in crisis. Last year, we held a small celebration. This year, I don’t even have enough money to feed my family.”

“We used to make most money from our Christmas and Easter sales,” he said. “Now nobody is in the mood to go shopping.”

In the battleground northern city of Aleppo, home to a sizeable Christian community, the head of the Arab Evangelical Church, Ibrahim Naseer, said few, if any churches would be holding mass or choir performances this year.

“Many Christians will be holding their prayers at home, rather than in the church,” he said.

For all too many, bereavement has removed any trace of Christmas cheer.

“I won’t be celebrating at all this year,” said Rand Sabbagh, whose partner, Christian filmmaker and activist Bassel Shehade, was killed in the central city of Homs in May.

“Practically every family has lost somebody, whether pro or anti-regime. Even people who were neutral… even they have been affected,” Sabbagh said. “Some people used to think that what is happening in Syria had nothing to do with them. We never imagined death to be so near.”