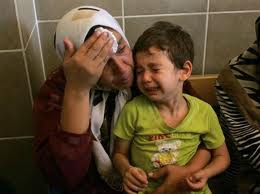 A protest will be held in front of the United Nations Relief and Works Agency (UNRWA) office in Beirut on Thursday to demand aid to the Palestinian refugees that have fled the Syria unrest to Lebanon.

“Twenty people from Yarmuk (in Damascus) arrived at my house, among them children, women and elderly people” on Monday, said Umm Khaled, 50, herself a long-time Palestinian resident of Baddawi.

“The living room has been turned into a bedroom. There’s no room to sit. There are mattresses even in the corridor,” said Umm Khaled who already has been hosting another 40 palestinian refugees from Syria.

“The situation of these families is disastrous. Most left all their belongings behind when they fled their homes n Syria.”

“I am sharing a single room with six Palestinian families from Syria. There’s around 50 of us. I fled Yarmuk with my children, but my husband stayed behind,” said Umm Ahmed, 45, who arrived in Baddawi on Monday.

“We left and we took a bus to the Syrian border with Lebanon. We saw hundreds of families waiting to cross the frontier,” said Umm Amr, 35, another palestinian refugee from Syria.

UNRWA reported that at least half of Yarmuk’s population of more than 112,000 had fled the violence .

For many of these Palestinians it is a painful journey, reminding them of what their ancestors experienced 64 years ago when they were forced to evacuate their homes following the creation of the state of Israel.

“Our motto now is no longer a return to Palestine, but to Yarmuk,” said 35-year-old Amna.

UNRWA spokeswoman Hoda Samra described the situation of the Palestinians as “catastrophic,” Samra said her agency has received less than 10 % of the funds pledged to help the “10,000 Palestinians who have arrived earlier in Lebanon from Syria.

MP Robert Ghanem who heads the Administrative and Justice Parliamentary Committee told Future television on Wednesday said that the influx of Syrian and Palestinian refugees into Lebanon have become a social and political “time bomb.”

“Lebanon is not capable of sheltering all the refugees,” MP Ghanem said.