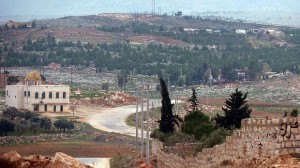 Beirut, Lebanon- Syrian rebels took full control of a sprawling military base on Tuesday after a two-day battle that left at least 35 government troops dead, an activist group said.

It was the second major base captured in the country’s north by the rebels, who have been racking up victories in the area in recent weeks and making inroads further south toward Damascus, seat of the government they are fighting to overthrow.

The Britain-based Syrian Observatory for Human Rights said the battle for the sprawling Sheik Suleiman military base, near the northern city of Aleppo, ended when the rebels took over the site’s main compound and warehouses that housed a military research center. They had first breached the base perimeter on Sunday afternoon, after weeks of fighting with soldiers loyal to President Bashar Assad.

The Observatory relies on a network of activists inside Syria. It did not give figures on rebel casualties from the battle.

The conflict started nearly 21 months ago as an uprising against Assad, whose family has ruled the country for four decades. It quickly morphed into a civil war, with rebels taking up arms to fight back against a bloody crackdown by the government. According to activists, more than 40,000 people have been killed since March 2011.

The Observatory said fighters from the jihadi groups, including Jabhat al-Nusra, Mujahedeen Shura Council and The Muhajireen, took part in the battle for the base.

Jabhat al-Nusra, which counts both Syrians and foreigners in its ranks, is one of the most effective fighting units on the rebel side. But the West is wary that such jihadi groups could hijack the uprising.

On Monday, Secretary of State Hillary Rodham Clinton designated Jabhat al-Nusra a foreign terrorist organization. The move freezes any assets its members may have in U.S. jurisdictions and bars Americans from providing the group with material support. The designation is largely symbolic because the group is not thought to have holdings or support in the United States, but officials hope the penalties will encourage others to take similar action and discourage Syrians from joining.

That step was part of a package intended to help the leadership of the newly formed Syrian Opposition Council improve its standing and credibility as it pushes ahead with planning for a post-Assad future.

The Observatory also reported clashes and shelling in several Damascus suburbs, including Aqraba, near the international airport where fighting started early this month.

The Local Coordination Committees, another activist group, said five people were killed during clashes between troops and rebels in the Damascus suburb of Rankous.

The Observatory and the LCC said there were casualties in clashes in the northwestern Jisr al-Shughour area near the border with Turkey.