Is cornered and frightened Assad considering using chemical arsenal against his Syrian people? 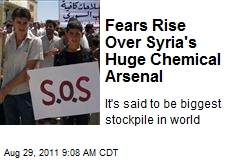 US President Barack Obama has given Syria’s regime a stark warning that any use of chemical weapons would be a “tragic mistake” for which“there will be consequences and you will be held accountable”. What has triggered the latest expressions of US concern?

Partly, it’s probably a straightforward assessment that the regime is now cornered. Bashar al-Assad is struggling for control of his own capital and his armed forces are demonstrably unable to roll back the rebel advances in much of rural Syria. If the regime would use chemical weapons when its back is firmly against the wall, that moment could be fast approaching.

More intriguing, however, is the suggestion that Syria’s armed forces might have taken some concrete steps to prepare to use chemical weapons. One American official told the New York Times: “The activity we are seeing suggests some potential chemical weapon preparation.”

In order to deploy sarin nerve gas, for example, four or five component chemicals must be brought together and then mixed. Normally, these “precursors”, as they are known, are held separately in different facilities. If, for example, they were being brought together inside the same installation, the only plausible explanation would be that Syria’s army was preparing their use. “It would be very hard to justify,” said Dina Esfandiary, an expert on Syria’s weapons of mass destruction at the International Institute for Strategic Studies. “There really isn’t another plausible explanation.”

So the US will be looking out for a key telltale sign: the concentration of precursor chemicals inside the same facility.

But Assad faces an impossible dilemma. From his point of view, the only rationale for using these weapons would be if his downfall would otherwise be absolutely inevitable. On the other hand, if he did choose to gas his enemies, that would be certain to trigger a US-led intervention that would seal his fate anyway. So rationality dictates that he should not use these weapons under any circumstances.

But even if Assad is a still a rational actor, is he fully in control? And does there come a point in the inexorable collapse of a dictatorship when rationality itself goes out of the window and the bunker syndrome takes over?