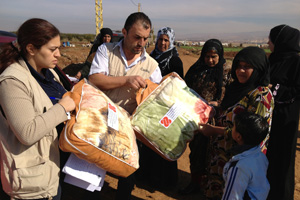 Winter is approaching fast for Syrian refugees in Lebanon, who are facing night-time temperatures that regularly dip below zero.

Lana, 21, from the suburbs of Damascus, worries about her three-month-old baby.

She fled Syria when the child was 10 days old, afraid for her daughter’s security when her home city started to be bombed. She has been living for the past two months in Taalabaya in Lebanon’s Bekaa valley region.

“I don’t know how things will be in the winter for my baby, it’s getting colder and colder,” she said.

She had been three times to the Caritas centre in the town looking for assistance but has not yet received a blanket or heater.

The UN Refugee Agency (UNHCR) and local NGO partners have started preparing, but things are going slowly amid worries about the lack of shelter and heating for the current 110,000 Syrian refugees (registered or waiting for registration), accordingUNHCR estimates.

Some of the public buildings and schools where Syrian families are staying have windows without glass and lack doors, something UNHCR is working to fix in the coming weeks.

Humanitarian organizations fear the most difficult conditions will be for those refugees being hosted by poor Lebanese families in the north and in the Bekaa Valley regions – the coldest parts of the country. Temperatures in Bekaa at night are already around eight degrees Celsius now and in the coming months will drop below zero.

“There are not enough apartments for people to rent and they are too expensive. We have found families living in garages in conditions that are not healthy at all,” said Maria Abou Diwan, a social worker with Caritas in Taalabaya.

Some 50 refugees (registered as refugees or waiting for documents from UNHCR) register at the centre every day to receive food and hygiene kits. They leave phone numbers and addresses and later get a home visit from the NGO to evaluate their living conditions.

No camps, many tents

It is common for refugee families to live more than five to a room or sleep on makeshift mats on the floor in public buildings or schools.

Drinking water is rare and toilet conditions are not for the faint-hearted.

A growing number of Syrian refugees in Lebanon rent small apartments paying US$100-300 a month.

Those being hosted by Lebanese families are increasingly being asked to contribute to the rent.

The Lebanese government wants to avoid setting up official camps for Syrian refugees, but the number of tented sites is rapidly growing in the Bekaa. Local landlords are erecting the tents as a business, and selling them for $300-700, or renting them out for about $200 a month, said Maria.

In Torbol, a district of Taalabaya, more than 200 families are living in tents without electricity, sewerage, water or paved roads. “We have nothing,” said a young refugee girl with long black braids who showed us her family tent. Inside, there were only mattresses and a few carpets.

When IRIN visited the site, Caritas was distributing blankets for 100 registered families. An old man started arguing loudly with social workers, complaining that he had only been given two blankets, when there were seven people in his family.

“Caritas and other charities promised us many things, but so far, they have done little,” said Abu Majed, 25, a Syrian refugee from Homs. He has been living in a tent with his wife and two children for six months.

“It is very hard living in Lebanon, everything is too expensive and we can’t find jobs. And now I’m worried about the winter. We don’t have blankets, gas or heaters,” he said.

Maria, from Caritas, told IRIN: “We still need a lot of money to buy food, clothes, fuel and stoves.”

Last month, the NGO said in an online press release: “Unfortunately, Caritas Lebanon is unable to provide any shelter assistance at the moment, due to a lack of funds.”

UNHCR has also said before that the scattered nature of the Syrian refugee population in Lebanon poses challenges in providing assistance in remote areas.

The continuing stream of Syrian refugees into Lebanon will only make things harder.

“We need to be prepared to assist a rising number of refugees. The influx of people is stable right now. By December we could pass the 120,000 mark,” said Sleiman.

In October, UNHCR said Lebanon had become the third country in the region to see its population of registered Syrian refugees and people waiting for registration exceed the 100,000 mark.

However, Caritas estimates that there is more than double that number in Lebanon that are not yet registered, especially in the south of the country.

“Turkey and Jordan already have refugee populations in excess of this figure, and region-wide the number has climbed to more than 358,000. Governments in states bordering Syria estimate there are tens of thousands more Syrians who have not yet registered,” UNHCR’s chief spokesperson, Melissa Fleming, told journalists in Geneva last month.

The UN recently issued an appeal for nearly $488 million to assist almost 300,000 Syrian refugees in Jordan, Lebanon, Iraq and Turkey. The latest UNHCR statistics estimate that the refugee total could reach 700,000 in a few months.

“The coordination between the government, the UN and NGOs in addressing the needs of the refugees is close,” Plumbly told reporters after his meeting with the premier.

Photo: Syrian refugees in Lebanon receive blankets ahead of the winter