The collateral damage of Syria’s explosion

by yalibnan
1932
While Libya, Egypt, Yemen, Bahrain and Tunisia implode, writes Thomas L. Friedman, Syria will explode if a political resolution is not found quickly, sending the entire region into chaos
Share: 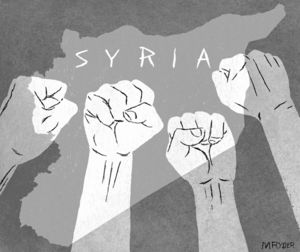 The sex scandal engulfing two of our top military and intelligence officers could not be coming at a worse time: The Middle East has never been more unstable and closer to multiple, interconnected explosions.

And for Obama’s second term, I fear that it could be the full nightmare — all of them at once. The whole Middle East erupts in one giant sound and light show of civil wars, states collapsing and refugee dislocations, as the keystone of the entire region — Syria — gets pulled asunder and the disorder spills across the neighborhood.

And you were worried about the “fiscal cliff.”

Ever since the start of the Syrian uprising/civil war, I’ve cautioned that while Libya, Egypt, Yemen, Bahrain and Tunisia implode, Syria would explodeif a political resolution was not found quickly. That is exactly what’s happening.

The reason Syria explodes is because its borders are particularly artificial, and all its internal communities — Sunnis, Shiites, Alawites, Kurds, Druze and Christians — are linked to brethren in nearby countries and are trying to draw them in for help. Also, Sunni-led Saudi Arabia is fighting a proxy war against Shiite-led Iran in Syria and in Bahrain, which is the base of the U.S. Navy’s Fifth Fleet. Bahrain witnessed a host of bombings last week as the Sunni-led Bahraini regime stripped 31 Bahraini Shiite political activists of their citizenship. And now someone in Syria has decided to start lobbing mortars at Israel.

What to do? I continue to believe that the best way to understand the real options — and they are grim — is by studying Iraq, which, like Syria, is made up largely of Sunnis, Shiites, Christians and Kurds. Why didn’t Iraq explode outward like Syria after Saddam was removed? The answer: America. 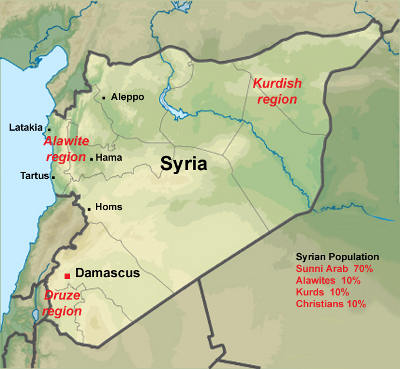 For better and for worse, the United States in Iraq performed the geopolitical equivalent of falling on a grenade — that we triggered ourselves. That is, we pulled the pin; we pulled out Saddam; we set off a huge explosion in the form of a Shiite-Sunni contest for power. Thousands of Iraqis were killed along with more than 4,700 American troops, but the presence of those U.S. troops in and along Iraq’s borders prevented the violence from spreading. Our invasion both triggered the civil war in Iraq and contained it at the same time. After that Sunni-Shiite civil war burned itself out, we brokered a fragile, imperfect power-sharing deal between Iraqi Shiites, Sunnis and Kurds. Then we got out. It is not at all clear that their deal will survive our departure.

Still, the lesson is that if you’re trying to topple one of these iron-fisted, multisectarian regimes, it really helps to have an outside power that can contain the explosions and mediate a new order. There is too little trust in these societies for them to do it on their own. Syria’s civil war, though, was triggered by predominantly Sunni rebels trying to oust President Bashar Assad and his minority Alawite-Shiite regime. There is no outside power willing to fall on the Syrian grenade and midwife a new order. So the fire there rages uncontrolled; refugees are now spilling out, and the Shiite-Sunni venom unleashed by the Syrian conflict is straining relations between these same communities in Iraq, Bahrain, Lebanon, Saudi Arabia, Turkey and Kuwait.

But Iraq teaches another lesson: Shiites and Sunnis are not fated to murder each other 24/7/365. Yes, their civil war dates to the 7th century. And, yes, when they started going after each other in Iraq, they did so with breathtaking chainsaw-nails-pounded-into-heads violence. There is nothing like a fight within the faith. Yet, once order was restored, Iraqi Shiites and Sunnis, many of whom have intermarried, were willing to work together and even run together in multisectarian parties in the 2009-10 elections.

So the situation is not hopeless. I know U.S. officials are tantalized by the idea of flipping Syria from the Iranian to the Western camp by toppling Assad. That would make my day, too, but I’m skeptical it would end the conflict.

I fear that toppling Assad, without a neutral third party inside Syria to referee a transition, could lead not only to permanent civil war in Syria but one that spreads around the region.

It’s a real longshot, but we should keep trying to work with Russia — Syria’s lawyer — to see if together we can broker a power-sharing deal inside Syria and a United Nations-led multinational force to oversee it.

Otherwise, this fire will rage on and spread, as the acid from the Shiite-Sunni conflict eats away at the bonds holding the Middle East together and standing between this region and chaos.