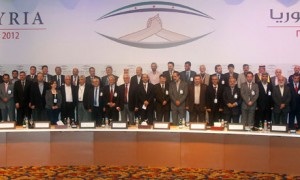 Qatar and Turkey, two of the Syrian opposition’s biggest international backers, have called for other states to endorse an umbrella deal signed on Sunday night that unites feuding anti-Assad groups and paves a way for funding to resume.

The formation of the group had been a key demand of the US and the Gulf states, which have sidelined the original political body, the Syrian National Council, and urged that a broader and more representative group be established.

After a week of wrangling in the Qatari capital, Doha, the chance of such a group being enshrined had nearly evaporated. However, an agreement was finally reached that absorbed the SNC and nominated a new leadership.

A former imam at the Umayyad mosque in the Syrian capital, Damascus, Ahmed Moaz al-Khatib, was named leader. Riad Seif, who proposed the new initiative, and Suhair Atassi, a female activist, will be his deputies.

Qatar, which had invested much regional capital in an accord being struck on its soil, said the international community no longer had an excuse to ignore the Syrian opposition. Turkey’s foreign minister, Ahmet Davutoglu, adopted a similar tone. Qatar later called for the new body to be considered the only legitimate representative of the Syrian people.

“Trust us that we will strive from now on to have this new body recognised completely by all parties … as the sole legitimate representative of the Syrian people,” said Qatar’s prime minister, Hamid bin Jassem.

The SNC, which has been lambasted as nepotistic exiles detached from realities inside Syria, will no longer be the dominant voice in the opposition to President Bashar al-Assad. The new group – the Syrian National Coalition for Opposition and Revolutionary Forces – will attempt to represent political, military and civil groups under a united banner.

The SNC remained reluctant to the end to lend its weight to the agreement, but faced a prosect of being sidelined altogether. It had already lost the confidence of the US and Arab League members as the Syrian civil war steadily worsened.

The new group is understood to be waiting for the recognition of the broader international community before announcing a provisional government.

Military leaders inside Syria and civilian leaders in exile are still unlikely to gain support for their call for the establishment of a no-fly zone over parts, or all, of Syria. The US has been reluctant to support such a move and Robert Ford, a senior administration official and former ambassador to Damascus, said Barack Obama was unlikely to drop his opposition during his second term as president.

Russia and China, which have blocked previous moves against the Assad regime at the United Nations security council, appear unlikely to change their stances.

Observers in Doha cautioned that the hard won agreement could still encounter trouble. Some Arab officials familiar with fraught opposition diplomacy say the SNC started with wide consensus and promise but later proved it could not deliver.