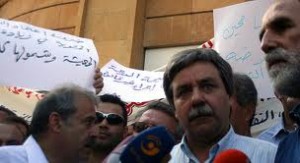 The Syndicate Coordination Committee staged a nationwide strike on Thursday to protest the cabinet’s failure to discuss the controversial new wages scale.

“The government backed down on its commitments… The SCC will escalate its endeavors,” the head of the SCC Hanna Gharib told Voice of Lebanon radio on Thursday.

Gharib also told LBCI that today’s strike was the most successful, since it witnessed a full commitment, pointing that “it showed unity among syndicates and a feeling of anger among teachers and civil servants resulting from the way the cabinet has been dealing with the pay scale issue.” “They wanted a battle, so let it be; their maneuvers are now exposed and the public knows well who should be held accountable,” Gharib said.

Gharib held the government and the Economic Committees, a grouping of the country’s businessmen and owners of major firms, responsible for the measures that will be undertaken by the SCC.

“We are not concerned about the fall of the current cabinet… We only care about safeguarding the rights of the citizens,” Gharib told As Safir newspaper in comments published on Thursday.

The cabinet convened at the Baabda Palace on Wednesday in the presence of Central Bank Governor Riad Salameh who insisted that the cabinet should first find the funds before boosting the wage scales .

All Public schools observed the strike and closed their doors on Thursday, but the teachers came to the schools only to clock in . A number of private schools also committed to the strike.