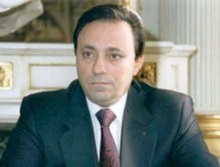 He added : “Nagib Mikati , may not be traveling to Syria, but his brother Taha is there most of the time and whatever orders he brings from Syria Mikati has to execute in Lebanon” .

The most recent order that came from Syria: ” Don’t resign and he didn’t resign”, Abdo said

Commenting on the concern that resignation of the cabinet could create vacuum while a national unity cabinet is being formed he said:

Commenting on the recent assassinations he said.

“What Wissam Al Hassan did in exposing the Syrian regime terrorism plots in Syria was huge.”

Commenting on the attempted assassinations he said :