Beirut blast is Seen as an extension of Syria’s war 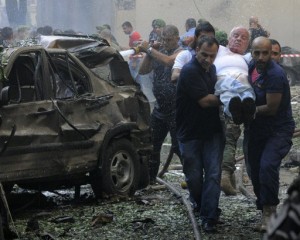 BEIRUT, Lebanon — A powerful bomb devastated a Christian neighborhood of this capital city of Lebanon on Friday, killing an intelligence official long viewed as an enemy by neighboring Syria and unnerving a nation as Syria’s sectarian-fueled civil war spills beyond its borders and threatens to engulf the region.

The blast, which sheared the faces off buildings, killed at least eight people, wounded 80 and transformed a quiet tree-lined street into a scene reminiscent of Lebanon’s long civil war, threatened to worsen sectarian tensions. By nightfall, black smoke from burning tires ignited by angry men choked the streets of a few neighborhoods in the city, which has struggled to preserve a peace between its many sects, including Sunni, Shiite, Christian and Druse.

Within hours of the attack, the Lebanese authorities announced that the dead included the intelligence chief of the country’s internal security service, Brig. Gen. Wissam al-Hassan, instantly spurring accusations that the Syrian government had assassinated him for recently uncovering what the authorities said was a Syrian plot to provoke unrest in Lebanon.

“They wanted to get him, and they got him,” said Paul Salem, a regional analyst with the Carnegie Middle East Center.

But if the attack was targeted, the blast was most certainly not. The force of the explosion left elderly residents fleeing their wrecked homes in bloodied pajamas and spewed charred metal as far as two blocks. Residents rushed to help each other amid the debris, burning car wreckage and a macabre scene of victims in blood-soaked shirts.

It was the first large-scale bombing in the country since 2008 and was the most provocative violence here linked to the Syrian conflict since it began 19 months ago.

The attack struck a heavy blow to a security service that had asserted Lebanon’s fragile sovereignty by claiming to catch Syria red-handed in a plan to destabilize its neighbor, which Syria has long dominated. It threatened to inflame sectarian tensions by eliminating General Hassan, a Sunni Muslim known for his close ties to fellow Sunni politicians who support the Syrian uprising against President Bashar al-Assad. General Hassan was viewed by Syrian opposition activists as an ally and protector.

Imad Salamey, a political science professor at Lebanese American University, blamed Mr. Assad’s government and said that the attack seemed intended to show that Syria has the ability to destabilize Lebanon and threaten to embroil the region in chaos.

The Syrian government issued a statement condemning the bombing, quoting the information minister, Omran al-Zoubi, as saying, “These sort of terrorist, cowardly attacks are unjustifiable wherever they occur.”

The attack harked back to the assassination of former Prime Minister Rafik Hariri, a longtime foe of Mr. Assad’s, in a car bombing in 2005. Syria was widely blamed, and protests in the aftermath of that killing forced Syria to withdraw its troops from Lebanon, a major blow to its regional influence. But a series of bombings targeting politicians, journalists and security officials followed, shaking Lebanon and sending the message that Syria’s power still reached deep into its neighbor.

The size and location of the bomb on Friday awakened a general feeling of dread that the Syrian conflict, which has already depressed Lebanon’s economy and sent thousands of Syrian refugees into the country, was coming home to Lebanese civilians, and could set off tit-for-tat killings and reprisals that could spiral out of control.

The blast seemed to accelerate a pattern already established, as the Syrian civil war increasingly draws in the region, crossing the borders of its many neighbors. Recently, a mortar blast from Syria killed civilians in southern Turkey, prompting the Turkish military to respond with artillery strikes into Syria for several days. Jordan has struggled to absorb as many as 180,000 refugees.

Shells have exploded in the disputed Golan Heights region occupied by Israel. Iran has been accused of sending weapons and advisers into Syria to help Mr. Assad. Hezbollah fighters from Lebanon have been killed in Syria and sent home for burial. Saudi Arabia and Turkey have provided weapons and cash to the rebels trying to oust Mr. Assad, and rebels have taken control of border crossings between Syria and Iraq.

In Beirut, there were efforts to tamp down animosities, and keep the peace. Not far behind the ambulances, politicians arrived at the scene of the blast. They urged Lebanese citizens to resist being drawn into the conflict — but also pointed fingers at Syria and its Lebanese allies in sharp language that seemed as likely to induce anger as to warn against it.

“For the first time, we feel that it is the regular Lebanese citizen who is being targeted in this explosion and, maybe, this is the beginning of what Syrian authorities have promised us in the past,” said Nadim Gemayel, a member of Parliament from the Christian Phalange movement that is part of Lebanon’s opposition March 14 bloc. “The Syrian regime had talked about burning everything in their path.”

As news spread of the bombing, the streets of Beirut’s largely Christian Ashrafiyeh district were initially calm. People walked dogs and escorted children home from school. But they also gathered in small groups warily discussing the bombing and clutched cellphones to share news. Outside a damaged grocery stood Sandra Abrass, a filmmaker and former Red Cross worker, frustrated that she was not allowed to help on the scene because her skimpy yellow flats were no protection against broken glass, and said she was in pain first for the wounded and then for Lebanon.

“You don’t feel safe any more,” she said. After growing up during the 1975-1991 civil war, she said, she was no longer used to the idea that bombs could go off at any moment, and feared that there would be more bombings and reprisals.

“They cannot let us live happily,” she said.

General Hassan came to prominence as a security chief for the assassinated former prime minister, Mr. Hariri. Early on, he was a suspect in that killing, but later helped build a circumstantial case, based on phone records, that a team from Hezbollah, the militant Lebanese Shiite organization aligned with Syria, had coordinated the Hariri attack and was at the scene of the murder. Hezbollah, which has since become an important member of Lebanon’s government, claims the records were fabricated.

Another security official, Wissam al-Eid, who helped compile the phone records, was killed in a car bombing in 2008, part of a series of assassinations of political figures, journalists and investigators.

More recently, in August, General Hassan shocked Lebanon by arresting a prominent pro-Syrian politician, Michel Samaha, on charges of importing explosives in a bid to set off bombs and wreak sectarian havoc as part of a Syrian-led plot. It was a surprising move in a country where state institutions have rarely had the power to take on political figures, especially those backed by foreign powers or Lebanese militias.

In a brief interview on Friday, the chief of the Internal Security Forces, Maj. Gen. Ashraf Rifi, said, “Wissam al-Hassan was targeted because of Samaha’s case.”

The Internal Security Forces have often been seen as allied with Sunni anti-Syrian factions. But Mr. Salem of Carnegie said that General Hassan did not pursue only his friends’ political enemies; he was also credited with disrupting numerous networks of Israeli spies.

Mr. Salem said that General Hassan and his investigators were “one of the bright spots that saw the Syrian influence apparently ebb,” demonstrating that “the Lebanese state was beginning to develop capacities, they could arrest Samaha, they were doing things that a sovereign state does.”

While some anti-Syrian politicians suggested that the bombing was intended to distract from allegations that Hezbollah is fighting on the Syrian government’s side, they stopped short of accusing the party of involvement in the bombing. Several analysts said Hezbollah was unlikely to carry out such an attack, which would threaten its political standing inside Lebanon.

In the bombed neighborhood in Ashrafiyeh district on Friday, Civil Defense officers picked pieces of flesh off a security fence and put them into plastic supermarket bags.

In an upstairs apartment nearby, Lily Nameh, 73, said she had been taking a nap with her husband, Ghaleb. “I thought it was an earthquake,” she said. “Suddenly everything was falling on us.” Her husband said, “It felt like a plane landed on the building.”

On Friday nights, areas of central Beirut are usually crowded with cars and pedestrians heading out to party. But after the bombing, the usual Friday night traffic jams never materialized, and watering holes that usually send excess crowds onto the sidewalks in neighborhoods known for night life sat quiet and forlorn.