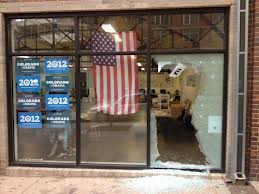 Police say someone fired a shot at an Obama campaign field office in Denver on Friday afternoon.

No one was injured, though people were inside the offices when the incident occurred, said Denver police spokeswoman Raquel Lopez.

“It looks like it was one shot that was fired into the structure,” she said.

The incident happened at about 3 p.m. at the campaign’s offices on West Ninth Avenue near Acoma Street, Lopez said.

Sam Levin, a reporter for the alternative newspaper Westword, later posted a photo on Twitter showing one of the office’s large, front windows broken out. By early evening, the window shards had been removed and a glass company was putting plywood up.

Lopez said police have a description of a “possible vehicle of interest.” She said she could not release that information while detectives are reviewing any available video footage of the incident and pursuing leads.

An Obama campaign spokeswoman declined to comment on the incident, instead referring a question to the police.