Jordanians in “Save the Homeland” rally demand reform

Thousands of demonstrators seeking democratic reforms and more economic opportunities marched through the Jordanian capital Friday in the largest rally here since the “Arab Spring” protests began sweeping the region.

The protesters led by the Islamist Muslim Brotherhood called on King Abdullah II, a key U.S. ally, to accelerate reforms. But they pointedly did not demand the end of the monarchy, which retains considerable support here.

Instead, the protesters said they were seeking a parliament that represented them better than the largely rubber-stamp, pro-government legislature that has long convened in Jordan.

The king issued a decree Thursday dissolving the parliament, paving the way for new elections that probably will be held early next year. The fact that he acted a day before the protest underscored the significance of the demonstration. 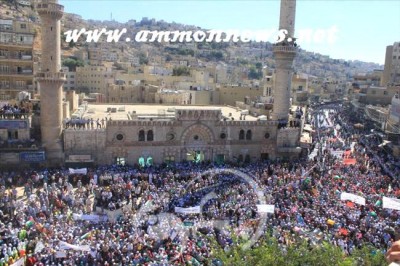 The Muslim Brotherhood has threatened to boycott the upcoming balloting if electoral laws that the group regards as unfair are not revised.

Demonstrators are calling for a constitutional system with a prime minister elected by the people or by an independent parliament, not appointed by the king, as is currently the case. Overall, the opposition is seeking reforms that would push Jordan toward a constitutional monarchy.

“We are not subjects, we are citizens,” said Mohammad Hadid, one of the protesters. “These are our rights, and not gifts from the king.”

Some demonstrators said time was running out for reform amid widespread unease about a lack of economic opportunity and a pervasive sense that corruption and graft are out of control. Protesters also complained about the broad reach of Jordan’s powerful security services.

“If there are no real reforms on top, there will be chaos,” said one protester, Saed Abaddi, a Muslim Brotherhood member. “This message is strong and loud, and it is the last message. After that the consequences will be dire.”

Protesters said their grievances had seldom been so publicly aired in Jordan, where critics say the government has recently moved to restrict free speech on the Internet.

But the major focus Friday was clearly on building support for structural changes that would curb the monarchy’s power, yet leave the king in place. Many also decried what they called a lack of economic opportunity in a nation where critics say the royal family and a small elite have long dominated.

The march was dubbed the “Save the Homeland” rally.

A planned counter-protest was canceled in an apparent bid to defuse tension and minimize the possibility of violence.

The march seemed to take place without major incident. Security was tight as dozens of groups, including unionists, leftist and free-press activists, marched amid a generally upbeat atmosphere. Participants converged in front of the Husseini Mosque downtown after Friday midday prayers.

Media estimates generally put the crowd at 10,000 to 15,000, lower than the 50,000 that the Muslim Brotherhood had predicted, but still a substantial turnout in a nation where security services keep a close eye on public displays of dissent. The government put the number of participants at less than 10,000.

Jordan has been the scene of many protest rallies since the Arab Spring ignited almost two years ago, but Friday’s march was considered the largest. At some earlier demonstrations, security personnel sometimes outnumbered the protesters.