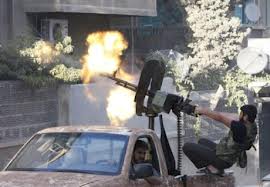 Syrian rebels advanced on several fronts in their campaign to seize Aleppo, but without a significant breakthrough after hours of fierce fighting, commanders in the northern city told AFP on Friday.

Meanwhile, as many as 118 people have been killed by Syrian forces across the country, Al Arabiya reported citing Syrian activists.

“On the Salaheddin front (southwest), we took one of the regular army bases. At least 25 soldiers were killed in this attack,” said Abu Furat, one of the leaders of the al-Tawhid Brigade, the most important in the city.

The rebels unleashed an unprecedented barrage of mortar fire against troops in Aleppo after announcing on Thursday a “decisive” battle for Syria’s second city, residents and a watchdog said.

The battles raged Thursday evening and well into the morning on Friday.

“We heard soldiers on their radio calling their chiefs to ask for reinforcements. They were crying and saying ‘we are all going to die,’” one of the rebels said.

At 3:00 pm (1200 GMT) on Thursday, several thousand rebels launched a coordinated attack on several fronts against the regular army, notably in the districts of Saif al-Dawla, Salaheddin, Izaa, Amiriyeh and Sukari.

Rebel commanders said the fighters were able to advance in the southwestern districts of Sukari and Izaa but had to retreat from Salaheddin because they were outgunned.

“To win a guerrilla street war, you have to have bombs and we don’t,” said Abu Furat.

The Britain-based Observatory said, however, that the battles were not yielding major gains for either side.

AFP correspondents reported that rebels’ new objective is the Omayyad Mosque in the center of Aleppo’s Old City, where fighting continued through midday and several explosions were heard.

Violence also raged in Damascus where troops attacked several rebel areas in the north and the south of the capital, leaving three civilians dead, the Syrian Observatory for Human Rights reported.

“Regime forces stormed the neighborhoods of Barzeh, Jubar and Qaboon in Damascus, cutting off streets and breaking into and raiding and torching some houses. They arrested a large number of residents,” the watchdog said.

It said at least 60 people — 30 civilians, 17 soldiers and 13 rebels — were killed nationwide on Friday.

Despite the violence, thousands of protesters took to the streets of Aleppo and other cities across Syrian on Friday after the weekly Muslim prayers in support of the rebel Free Syrian Army, the Observatory said.

“May God protect the Free Syrian Army,” demonstrators chanted in Kfar Zita in the central province of Hama.

Over 30,000 people have been killed in Syria since the outbreak of the revolt, according to the Observatory while the U.N. puts the death toll at 20,000.