Over 300 Syrian people killed in one of the bloodiest days 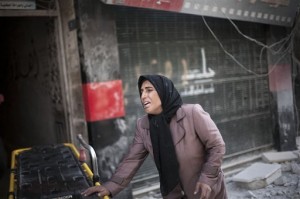 More than 300 people were killed in Syria on Wednesday, the Syrian Observatory for Human Rights said, in one of the bloodiest days in the 18-month uprising against President Bashar al-Assad.

World leaders meeting at the United Nations have expressed concern at the continuing violence in Syria but are deadlocked over their response to the conflict, which the Observatory says has claimed 30,000 lives since March 2011.

The British-based organization, which monitors violence in Syria through a network of activists, said in a report released on Thursday that 55 people were killed in rural areas around Damascus. They included at least 40 who appeared to have been shot in cold blood in the town of al-Dhiyabia, southeast of the capital.

Other activists have put the death toll in al-Dhiyabia as high as 107, blaming Assad’s security forces for what they said was a massacre. Video published by activists showed rows of bloodied corpses wrapped in blankets. The victims shown on camera appeared to be male, from 20-year-olds to elderly men.

The Observatory also said 14 people were killed in a rebel bomb attack on a military command centre in Damascus and in an ensuing prolonged gunbattle between rebels and security forces.

Violence in Syria has deepened as the fight against Assad has became more militarized and the president has responded with increasing use of force – including regular air strikes and bombardments against rebel areas.

In the first nine months of the conflict, the United Nations human rights chief said around 5,000 people had been killed. U.N. officials have given up trying to monitor the violence but the Observatory’s figures suggest five times as many people have been killed in the second nine-month period.

The Centre for Documentation of Violations in Syria, which is linked to the grassroots anti-Assad Local Coordination Committees, puts the overall death toll at 27,318.

Photo: A Syrian woman cries near Dar El Shifa hospital while the body of her brother, killed by Syrian Army, lies on the street in Aleppo, Syria, Tuesday, Sept. 25, 2012.