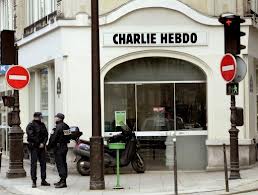 A French magazine published vulgar caricatures of the Prophet Muhammad on Wednesday, inflaming global tensions over a movie insulting to Islam. In response, the French government ordered embassies and schools to close Friday in about 20 countries.

The move by the provocative weekly Charlie Hebdo followed days of violent protests from Asia to Africa against the U.S.-produced film “Innocence of Muslims” and turned France into a potential target of Muslim rage. Up to now, American government sites have drawn the most ire.

Violence linked to the amateurish movie, which portrays the prophet as a fraud, a womanizer and a child molester, has killed at least 30 people in seven countries, including the American ambassador to Libya.

On Wednesday, several hundred lawyers protesting the movie forced their way into an area in Pakistan’s capital that houses the U.S. Embassy and other foreign missions.

The United States temporarily closed its consulate in an Indonesian city because of similar demonstrations and hundreds protested the film in Sri Lanka’s capital, burning effigies of President Barack Obama.

The French government ordered embassies and schools abroad to close on Friday, the Muslim holy day, as a precautionary measure in about 20 countries, according to the foreign affairs ministry. It ordered the immediate closure of the French Embassy and the French school in Tunisia, which saw deadly film-related protests at the U.S. Embassy last Friday.

The French Foreign Ministry issued a travel warning Wednesday urging French citizens in the Muslim world to exercise “the greatest vigilance,” avoiding public gatherings and “sensitive buildings” such as those representing the West or religious sites.

At the same time, the country — which has western Europe’s largest Muslim population — plunged into a new debate over the limits of free speech in a modern democracy.

France’s prime minister said freedom of expression is guaranteed, but cautioned that it “should be exercised with responsibility and respect.”

Foreign Minister Laurent Fabius warned that Charlie Hebdo could be throwing “oil on the fire,” but said it’s up to the courts to decide whether the magazine went too far.

The magazine’s crude cartoons played off the film and ridiculed the violent reaction to it. Riot police took up positions outside the offices of the magazine, which was firebombed last year after it released an edition that mocked radical Islam.

Charlie Hebdo’s chief editor, who goes by the name of Charb and has been under police protection for a year, defended the cartoons.

“Muhammad isn’t sacred to me,” he said in an interview at the weekly’s offices on the northeast edge of Paris. “I don’t blame Muslims for not laughing at our drawings. I live under French law; I don’t live under Quranic law.”

Charb said he had no regrets and felt no responsibility for any violence.

“I’m not the one going into the streets with stones and Kalashnikovs,” he said. “We’ve had 1,000 issues and only three problems, all after front pages about radical Islam.”

“This is a disgraceful and hateful, useless and stupid provocation,” Dalil Boubakeur, rector of the Grand Paris Mosque, told The Associated Press. “We are not Pavlov’s animals to react at each insult.”

A small-circulation weekly, Charlie Hebdo often draws attention for ridiculing sensitivity around the Prophet Muhammad, and an investigation into the firebombing of its offices last year is still open. The magazine posted a statement online saying its website had been hacked.

Abdallah Zekri, president of the Paris-based Anti-Islamophobia Observatory, said his group is considering filing a lawsuit against the magazine.

“People want to create trouble in France,” he said. “Charlie Hebdo wants to make money on the backs of Muslims.”

Charlie Hebdo was acquitted in 2008 by a Paris appeals court of “publicly abusing a group of people because of their religion” following a complaint by Muslim associations.

Prime Minister Jean-Marc Ayrault said organizers of a demonstration planned for Saturday against the “Innocence of Muslims” won’t receive police authorization. Paris prosecutors have opened an investigation into an unauthorized protest last Saturday around the U.S. Embassy that drew about 150 people and led to scores of arrests.

The debate about the limits of free speech spread to neighboring Germany, where Foreign Minister Guido Westerwelle spoke on the topic.

“I call on all those, especially those who rightly invoke the right of freedom of speech, to also act responsibly. The one who now puts more oil on the fire on purpose, with obvious effect, is not the greatest thinker,” he said Wednesday in Berlin.

The German Embassy in Sudan, which was attacked last week, remains closed and security at German embassies in other countries has been beefed up, he said.

A German group in Berlin said it has dropped plans to show extracts of the film “Innocence of Muslims” because of the outcry it has caused.

The cartoonist of the French caricatures published Wednesday, who goes by the name Luz, was defiant.

“We treat the news like journalists. Some use cameras, some use computers. For us, it’s a paper and pencil,” he said. “A pencil is not a weapon. It’s just a means of expression.”

Outside the Charlie Hebdo offices, a passer-by wearing a traditional Muslim tunic said he was neither surprised nor shocked by the cartoons. He criticized France’s decision to close embassies and schools for fear of protests by extremists.

“It gives legitimacy to movements that don’t have any,” said Hatim Essoufaly, who was walking his toddler in a stroller.

In Pakistan, the lawyers who protested in Islamabad shouted anti-U.S. slogans and burned an American flag after they pushed through a gate, gaining access to the diplomatic enclave before police stopped them. They called for the U.S. ambassador to be expelled, and then peacefully dispersed.

Much of the anger over the film, which denigrates Islam’s Prophet Muhammad, has been directed at the U.S. government even though the film was privately produced in the United States and American officials have criticized it.

The U.S. Embassy in Indonesia sent a text message to U.S. citizens saying that the consulate in Medan, the country’s third-largest city, has been closed temporarily because of demonstrations over the film. About 300 members of Hizbut Tahrir Indonesia, a pan-Islamic movement, rallied peacefully on Wednesday in front of the U.S. consulate in Medan. Later, about 50 Muslim students also protested there. Both groups called on Washington to punish the makers of the film.

On Tuesday, Islamic militants sought to capitalize on anger over the film, saying that a suicide bombing which killed 12 people in Afghanistan was revenge for the video and calling for attacks on U.S. diplomats and facilities in North Africa.