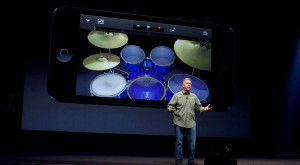 Apple introduced a new iPhone on Wednesday with a larger screen, faster wireless Internet speeds and a more powerful chip, as the company again seeks to demonstrate the staying power of one of the technology industry’s great franchises.

The new iPhone 5, which will go on sale Sept. 21, will start at $199 with a two-year wireless contract, as have previous versions of the device. Apple said the new device would be 18 percent thinner and 20 percent lighter than the previous version of its smartphone.

“IPhone 5 is the best phone we’ve ever made,” said Philip Schiller, Apple’s senior vice president for worldwide marketing, at an event in San Francisco where the device was introduced.

In what could be one of Apple’s more vexing moves with a new product, though, the company got rid of the traditional 30-pin dock connector for connecting the iPhone to power cables, stereo docking stations and other peripherals, replacing it with a smaller connector it calls Lightning. The change means that owners of existing iPhone accessories will have to purchase an adapter from Apple so they can plug the new phone into those devices. The company did not say how much that adapter would cost.

Apple said it was making the change because the new connector is more durable and frees up space for other technologies inside the iPhone. The company said many of the functions of traditional iPhone cables, other than charging, were now handled by wireless connections like Bluetooth.

The bigger screen in the iPhone 5 is the first time Apple has altered the dimensions of the iPhone’s display, which has measured 3.5 inches diagonally since the original iPhone Apple released in 2007. While the display at that time seemed gigantic compared with the tiny screens on most cellphones, Apple’s competitors have been far more aggressive in pushing more capacious displays on their smartphones, with some screens approaching nearly 5 inches.

Apple said the new display offered a bigger canvas for activities like reading a book, browsing Web sites and watching movies. It also shows how the dividing line between phones and tablet computers is becoming fuzzier.

Apple is developing a new model of the iPad with a 7.85-inch display that it could announce before the start of the holiday shopping season, according to people with knowledge of the project who declined to be named discussing confidential plans. The size of the display on the current iPad is 9.7 inches.

Apple’s closest rival in the smartphone market, Samsung, has experimented ceaselessly with different screen sizes. Its Galaxy S III smartphone has a 4.8-inch display, while its Galaxy Note tablet has a 5.3-inch screen.

The iPhone 5 is a more significant overhaul of the design of Apple’s smartphone than the iPhone 4S, a product criticized by some for featuring mostly incremental improvements inside a device that looked nearly identical to the iPhone that came before it. Apple seemed to denote that product’s more modest changes by reserving the iPhone 5 name for the product it introduced on Wednesday.

Even so, the iPhone 4S went on to be a big seller.

Apple will continue to sell its iPhone 4S, dropping the starting price of the device to $99 with a two-year wireless contract. The iPhone 4 will be free with a contract.

The new, faster Apple-designed chip inside the iPhone will let users open e-mail, load music and interact with other applications more quickly. The game developer Electronic Arts showed a photo-realistic car-racing game running on the new device with graphics that closely resemble those of high-end console systems.

The device will also work on the latest variety of high-speed data networks with wireless carriers, known as LTE.

The iPhone 5 has a new feature that will allow users to easily stitch together multiple images into a panorama, a feature that has been available in some apps and stand-alone digital cameras for some time.

Apple also announced a revamping of some parts of its product line that have received less attention in recent years — its iPod media players and iTunes software. It redesigned the iPod Nano with a bigger screen that supports multitouch gestures. And a new version of the company’s most popular iPod, the iPod Touch, will come with the same 4-inch high resolution display as the new iPhone will have. The new iPod Touch will also support Siri, Apple’s voice-activated assistant, and will come in a variety of colors.

Anticipation for the new iPhone ran high ahead of the event, as it always does leading to the late summer and early fall period when Apple typically introduces new electronics products. The usual swirl of rumors around the latest Apple phone were so intense this year that Apple said they were hurting sales of current iPhones, leading to a rare earnings disappointment from Apple.

The iPhone has become a gold mine for Apple, accounting for $16.2 billion in sales, or 46 percent of Apple’s total revenue, during the quarter that ended June 30.

But the company has also faced growing competitive pressure, most notably from Samsung, which extended its lead over Apple during the second quarter of the year. Samsung accounted for 32.6 percent of global smartphone shipments during that period, compared with 16.9 percent for Apple, according to IDC.

Most of Samsung’s share of the smartphone comes from products that run Google’s Android operating system, which powered 68.1 percent of smartphones shipped worldwide in the second quarter, IDC estimated.

Apple’s share of the phone market, though, often gets a big boost over the holiday season and in the quarter immediately after the company introduces a new iPhone model. Wall Street analysts expect that pattern to continue with the new iPhone.

Apple is also fighting Samsung in courtrooms, contending that the company violated Apple patents. Last month, Apple won a huge victory in the most significant of the legal fights against its South Korean rival when a jury in a federal court in San Jose, Calif., awarded Apple more than $1 billion in damages. Samsung has said it will appeal the decision.