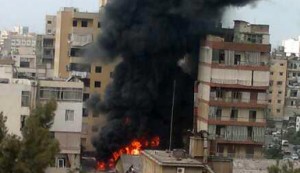 Beirut – An Egyptian national was killed and several others were injured following the explosion of an electric power generator set at al-Sabtieh intersection in Beirut.

Civil defense teams rushed to the scene of the incident to extinguish the fire.

This has been the worst year ever in power blackouts in Lebanon and for this reason the standby electric power generator sets that were designed to run in emergencies only have been running almost continuously. This has resulted in many accidents throughout the country.

The sad part about the blackouts, it is getting worse day by day. Many municipalities are now seriously thinking about generating their own electricity because they cannot depend on the government any longer to provide this vital service.

Parliament has approved spending $1.2 billion on new power plants, and the Cabinet has agreed, as a temporary measure, to rent power-generating ships for up to three years. But disputes over the amounts of kickbacks ( for Energy Minister Gebran Bassil and Finance Minister Mohammad Safadi ) are reportedly behind the delay in the arrival of the power generating ships.

During the past e months, angry protesters across the country set tires on fire and blocked roads in protests against the blackouts

The unprecedented harsh power rationing is burdening not only residents who are bearing the increasing cost of power generators but also on businesses and is threatening the food, economic and social safety according to local observers.