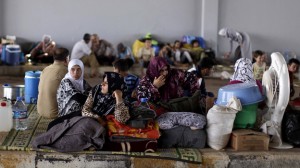 Syrian civilians’ living conditions are worsening dramatically, as dozens are killed every day in the fighting and it is becoming harder to obtain food and other basic needs, the International Committee of the Red Cross said on Friday.

The independent agency, whose 50 aid workers in Syria are confined to Damascus because of the lack of security, has been unable to send out convoys with supplies for the past two weeks, ICRC spokesman Hicham Hassan said.

“The situation in many parts of Syria is currently edging towards irreversible deterioration. Assisting the fast-growing number of needy people is a top priority,” the ICRC said in a statement, adding that tens of thousands have been displaced in recent weeks and most are completely dependent on assistance.