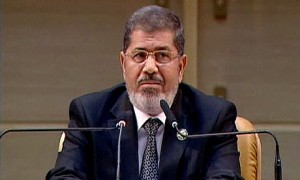 In his much-awaited speech on August 30 the newly-elected Egyptian president said: “The revolution in Egypt is the cornerstone for the Arab Spring, which started days after Tunisia and then it was followed by Libya and Yemen and now the revolution in Syria against its oppressive regime.”

This prompted the Syrian delegation to walk out of the summit, although the millions of Iranians watching the event on TV or listening on the radio were told Morsi was actually referring to Bahrain.

And when Morsi called on the fractured Syrian opposition movement to unite, the interpreters slipped in another a convenient swap for Bahrain, a Gulf State where largely Shiite protests against the ruling Sunni monarchy have been supported by Iran.

What was lost in translation during the live speech had mileage beyond the Non-Aligned Movement summit in Tehran.

Conservative Iranian website Farda quoted Morsi saying that he hoped Syria’s “popular regime” would survive and that the Syrian people was “free” and would “resist the will of foreign plotters”.

In fact, Morsi had told the summit that “our solidarity with the struggle of Syrians against an oppressive regime that has lost its legitimacy is an ethical duty, and a political and strategic necessity.”

Ban Ki-moon puts the boot in on Israel

Shiite theocracy Iran is one of Syrian leader Bashar al-Assad’s staunchest supporters in the face of an increasingly bloody uprising that began in March 2011.

Ahead of the NAM summit, Tehran had touted historic Morsi’s visit – the first by an Egyptian ruler in decades – as a diplomatic triumph.

Sadly for the Iranian leaders, Morsi was not so obliging to his hosts.

Neither was UN Secretary General Ban Ki-moon, whose presence at the summit had been criticised by both the USA and Israel.

Ban was broadly critical of Iran, which sees Israel as its arch-enemy and is suspected of developing nuclear weapons, even if he did not mention the Islamic Republic by name.

“I strongly reject threats by any member state to destroy another or outrageous attempts to deny historical facts such as the Holocaust,” he said in his speech.

“Claiming that Israel does not have the right to exist or describing it in racist terms is not only wrong but undermines the very principle we all have pledged to uphold.”