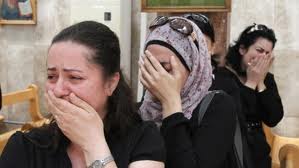 EIGHT children and nine women are among at least 20 people killed as government forces bombarded the Idlib region of northwest Syria, the Syrian Observatory for Human Rights says.

The monitoring group said troops shelled the Abu Zohur area of Idlib on Thursday after rebel claims of having seized control of its airport and shooting down a MiG warplane in fierce clashes with the military.

Rebels earlier seized control of part of the airport, which they say has been used to bomb local areas, according to the Britain-based Observatory.

Local rebel chief Colonel Afif Mahmoud Suleiman told AFP that hundreds of rebels attacked the airport and shot down the MiG with automatic weapons fire shortly after it took off.