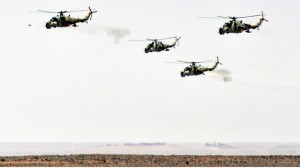 Syrian military helicopters dropped thousands of leaflets over Damascus and its suburbs Tuesday, urging rebels to hand over their weapons or face “inevitable death” as part of a widening and deadly offensive to recapture areas near the capital that have fallen into rebel hands.

The leaflets appear to be part of the regime’s psychological warfare against the rebels, but are highly unlikely to have any effect on fighters intent on toppling President Bashar Assad’s regime. Human rights groups say more than 20,000 people have been killed in Syria since the revolt against Assad began in March 2011.

The head of the main Syrian opposition group, the Syrian National Council, criticized U.S. officials for saying it was premature to speak about a provisional Syrian government.

Abdelbaset Sieda, speaking in a telephone interview with The Associated Press, said the opposition is making “serious” preparations and consultations to announce a transitional government, but admitted it is not imminent.

On Monday, French President Francoise Hollande called on the Syrian opposition to form a provisional government, saying France would recognize it. But Hollande’s statement, believed to be the first of its kind, was quickly shot down by U.S. officials who said it was premature to speak about a provisional government when Syria’s fractured opposition hasn’t even agreed yet on a transition plan.

The officials, speaking on condition of anonymity because they weren’t authorized to speak publicly on the matter, cited persistent disagreements among the Syrian National Council and rival opposition groups, and between Syrian opposition figures campaigning outside the country and rebels fighting the Assad regime on the front line.

“We’re nowhere near that yet,” one U.S. official said.

Sieda said the U.S. comments show the international community was not ready not ready” to take decisive decisions when it comes to Syria.

“It seems to me as if the international community is not prepared to take decisive decisions and blames the Syrian opposition for its own shortcomings,” Sieda said.

“Yes there are differences within the Syrian opposition and this is normal in any country, but as long as we are agreed on a common vision, these differences can be overcome,” he added.

Syria’s opposition has been plagued by divisions and infighting since the start of the uprising last year, and forming a transitional government is fraught with difficulties.

In addition to the SNC, several other opposition groups are known to be making similar plans, including a new opposition alliance headed by veteran opposition figure Haitham Maleh.

Sieda said his group has been contacting other opposition figures and the Free Syrian Army rebels to consult over a transitional government, but admits they have not started discussing names yet.

For more than a month, the military has been fighting major battles against rebels in the outskirts of Damascus and its suburbs while engaged in what appears to be a stalemated fight in the north against rebels for control of Aleppo, the nation’s largest city and commercial capital.

The government recently has intensified its offensive to recapture rebellious districts on the capital’s periphery, and hundreds of people have been killed in several days of shelling and clashes in the affected areas. Over the weekend evidence mounted of mass killings by regime forces in the Damascus suburb of Daraya after it was stormed by troops.

Some of the leaflets dropped Tuesday, which were signed by the armed forces and the army’s general command, read: “The Syrian army is determined to cleanse every inch in Syria and you have only two choices: Abandon your weapons … or face inevitable death.”

“No one will help you. They have implicated you in taking up arms against your compatriots,” they said. “They drown in their pleasures while you face death. Why? And for whom?”

Syrian authorities blame the 17-month uprising on a foreign conspiracy and accuse oil-rich Gulf countries Saudi Arabia and Qatar, in addition to the U.S. and Turkey, of backing “terrorists” seeking to oust the regime.

Assad told an Iranian delegation this week that he was determined to crush the conspiracy against Syria “whatever the price.”

With its forces stretched thin by fighting on multiple fronts, Assad’s regime has increasingly turned to air power, unleashing both helicopters and fighter jets on the rebels.

The lightly armed fighters, in turn, have grown bolder and their tactics more sophisticated in recent months. Rebels claimed to have shot down a military helicopter that crashed in flames in the Damascus district of al-Qaboun Monday. State media confirmed the crash but gave no details about the cause.