Sharp rise in number of Syrians fleeing to Turkey 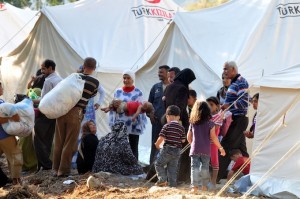 Syrians are pouring across the border to escape fighting in their battered homeland and diarrhea disease has broken out in rural areas near Damascus, U.N. aid agencies said on Friday.

“There has been a further sharp rise in the number of Syrians fleeing to Turkey,” Edwards told a news briefing.

“There are now almost 65,000 Syrians in 9 camps in Turkey, though not all yet formally registered. To put this in perspective, about 40 percent arrived in August.”

A Syrian air strike in the rebel-held border town of Azaz on Wednesday killed 30 people, a local doctor said.

Overnight, more than 1,000 Syrians arrived in Jordan, Edwards said. The UNHCR is working to improve the ratio of people to toilets – currently 40 to one – in Za’atri camp which holds nearly 8,000 of some 47,000 refugees registered in Jordan.

The humanitarian situation in Syria has deteriorated as fighting escalates, cutting off civilians from food supplies, health care and other assistance, U.N. agencies say.

Some 1.2 million people are uprooted within the country, many staying in schools or other public buildings, UNHCR quoted the U.N.’s regional humanitarian relief coordinator as saying.

U.N. humanitarian chief Valerie Amos, ending a visit to Syria, said on Thursday up to 2.5 million people needed aid in the country, where President Bashar al-Assad’s forces have been fighting rebels seeking his overthrow for 17 months.

There has been an outbreak of diarrhea among residents in part of the province of Rural Damascus because the water supply has been contaminated by sewage, the World Health Organisation (WHO) said.

“In one pocket of Rural Damascus there are 103 suspected cases of ecoli. Laboratory testing is still going on,” Richard Brennan, director of WHO’s emergency risk management and humanitarian response department, told Reuters. “It is due to contamination of the water supply.”

“We have heard of other pockets (of diarrheal disease) in other areas of Rural Damascus, but have no details,” he said.

Sixty-one children under age 10 are among the 103 cases discovered by health workers in a mobile clinic, WHO spokeswoman Fadela Chaib said. “The local authorities have been alerted and are taking action,” she said.

Children are particularly vulnerable to diarrheal diseases which require treatment including hydration and antibiotics, Brennan said.

“We know from Syrian authorities that an estimated 38 hospitals and 149 other clinics have been either substantially damaged or destroyed, which clearly worsens the access to health care,” he told a news briefing.

The World Food Programme (WFP) said that since the start of July, it had brought food rations for 100,000 people to Aleppo.

“Despite difficulties and violence, we expect to reach an additional 25,000 there in coming days,” WFP spokeswoman Elisabeth Byrs said, noting that WFP supplies are distributed by the Syrian Arab Red Crescent.

A U.N. peacekeeping chief said on Thursday that Syria’s government and rebels had “chosen the path of war”, as the world body ended its doomed monitoring mission to Damascus and world powers remained deadlocked over how to limit the spreading conflict.