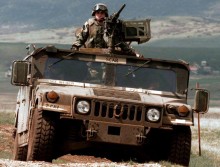 The Lebanese Army Command issued the following statement on Friday:

“In the framework of the U.S. aid for the Lebanese Army, the Logistics branch received at the port of Beirut on Friday 31 armored Humvee vehicles which is part of the U.S. aid package for the army.”

About 85% of the LAF’s equipment is American-made with the remaining being British, French, and Soviet-made. The Lebanese army is trying to rearm and modernize itself through new aids and purchases from different countries such as the United States, Belgium, Russia, and The Netherlands.