Hezbollah denied detention of its member by Syria rebels 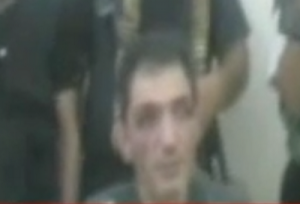 Lebanon’s militant Hezbollah group denied Tuesday that a man captured in the Syrian capital of Damascus and shown in a video released by the rebels was one of its members.

The video is the latest incident to reflect rising sectarian divisions in Syria’s vicious civil war, which has seen an increase in abductions of Shiite Muslims who many rebel fighters perceive as supporting President Bashar Assad. The regime is dominated by members of Assad’s Alawite minority sect, an off-shoot of Shiite Islam. Meanwhile, Sunnis, who are the majority in Syria, make up the backbone of the opposition.

The video purporting to show the captured Lebanese man followed another highly circulated rebel video Monday, showing what the rebels claimed was the downing of a Syrian MiG and armed men later holding the captured pilot who ejected. Syria acknowledged a pilot had bailed out of a disabled plane but blamed the crash on a technical malfunction.

In the video with the Lebanese captive, a man identifies himself as Hassane Salim al-Mikdad, and says he was one of 1,500 Hezbollah fighters sent to Syria on Aug. 3. The video was said to have been released by rebels and aired by Arab satellite TV Al-Arabiya on Tuesday.

“Most of those who entered were snipers,” said the captive, whose face showed bruises as three masked gunmen stood behind him. A man, who could not be seen, was asking the hostage questions.

The captive then says that Hezbollah leader Sheik Hassan Nasrallah gathered the men before they headed to Syria and told them that they should go to “support the Shiite regime and the Shiite army against Sunni gangs.”

The authenticity of the video could not be independently confirmed.

Hezbollah, a Shiite Muslim group, is a key backer of Assad’s regime. The Syrian opposition has repeatedly accused it of sending fighters to Syria, which Hezbollah denies.

Hezbollah issued a statement early Tuesday saying it “categorically denies that Mr. Hassane Salim al-Mikdad is one of its members.”

There have been several attacks and abductions in Syria of Shiites from Lebanon, Iran and Iraq over the past months that were blamed on Syrian rebels. In May, Syrian rebels captured 11 Lebanese Shiites shortly after they crossed from Turkey on their way to Lebanon.

Earlier this month, 48 Iranians were captured by Syrian rebels near Damascus. Rebels claim the Iranians include members of Tehran’s Revolutionary Guard and were on a “reconnaissance mission” in the Syrian capital. Iran insists the men were on a religious pilgrimage.

The Lebanese are apparently held to try to pressure the government in Beirut to show greater support for the Syrian rebels — which is unlikely because of Hezbollah’s strong influence and backing of Assad.

Also, many Iraqi Shiites, streaming back to their homeland in the past month to escape the conflict in Syria, reported a rash of attacks against their community, apparently by Sunni rebel gunmen. In July, 23 Iraqi Shiites were killed in Syria, some of them beheaded, according to the Washington-based Shiite Rights Watch. In one gruesome case, the U.N. said an Iraqi family of seven was killed at gunpoint in their Damascus apartment.

The motives for the attacks on Iraqis are unclear. They may be revenge against any Iraqi because the Shiite-led Iraqi government is seen as siding with Assad.

In other violence across Syria on Tuesday, activists reported clashes and shelling in the northern city of Aleppo, southern province of Daraa, suburbs of Damascus and the northwestern region of Idlib.