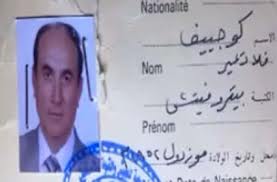 A Syrian rebel group said on Wednesday it had killed a Russian general working as an adviser to Syria’s ministry of defence in an operation on the outskirts of the capital Damascus, but within hours Moscow vociferously denied the report.

Russian officials presented a man they said was Vladimir Petrovich Kuzheyev before a television camera at the Defence Ministry in response to reports an officer by that name had been killed. The ministry called the claims a ‘bald-faced lie’.

“I want to confirm that I am alive and well. I am in good health and I’m living in Moscow,” said a balding white-haired man described as Kuzheyev, a reserve general, in Defence Ministry footage obtained by Reuters.

The man in an open-necked blue and white striped shirt repeated the statement in at least two takes, his words prompted by a man from behind the camera.

A group calling itself the Hawks Battalion said in a video statement that it had killed a Russian general named Vladimir Petrovich Kochyev, showing what the rebels said was a copy of his ID issued by the Syrian military and written in Arabic.

The difference between the spellings of the names may be due to the way the Cyrillic and Arabic letters were transcribed.

The rebels said the operation in which he was killed took place in the western Ghouta region on the edge of Damascus.

The video also showed a photo of Kochyev and another Russian officer posing with Syrian chief of staff Fahed al-Freij. The man in the Defence Ministry footage resembled an older and fuller faced version of the general in the ID picture.

Kuzheyev did not make clear whether he had been in Syria. But Interfax news agency quoted a security source as saying he had been there advising the Syrian Defence Ministry before being transferred to the reserve in 2010.

Russia is one of the few countries that has backed Assad diplomatically ever since the popular uprising against his rule began 17 months ago. It is believed to have several hundred military personnel in Syria, but might be reluctant to be publicly associated with army operations against the rebels.

In the video, Lieutenant Majid Sayyed Ahmad of the Hawks Battalion said: “With the help of God, the Russian adviser for the minister of defence for military scientific affairs, General Vladimir Petrovich Kuzheyev, has been eliminated with his personal translator, Ahmad a-Ayyouq”.

“A number of Syrian army documents have been also seized, together with reports about the opposition and the Free Syrian Army, adding to the achievements on the road to the liberation of Syria from the Assad gang,” said Ahmad, who gave his title as “commander of operations and special assignments”.

The same group, described by an opposition source as a professional unit led by officers who had defected from the Syrian army, claimed responsibility for the assassination of four of President Bashar al-Assad’s top lieutenants in Damascus last month.

Among the documents the video showed was a letter from Freij, who is also the defence minister, asking the head of Russian military advisers in Syria to extend Kochyev’s term.