Severe shortage of medicine in Syria as clashes escalate 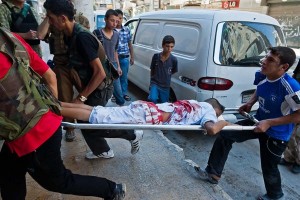 Escalating violence in Syria has shut down pharmaceutical plants, piling another worry onto the woes facing the Syrian people: Severe shortages of medicine.

The World Health Organization warned Tuesday that growing clashes between forces loyal to President Bashar Assad and opposition fighters around the cities of Damascus, the capital, and Aleppo have damaged and closed many of the local plants that make the vast majority of medicines. The country produces most of its own pharmaceuticals.

Drugs to treat tuberculosis, hepatitis, diabetes and other maladies are urgently needed, along with chemical reagents to screen blood before it can be used for infusions for trauma and surgery patients, according to reports received by the United Nations agency.

The shortages add to the existing frustrations facing medical agencies trying to help the wounded. Just getting to the injured is the main challenge, WHO spokesman Tarik Jasarevic told reporters in Geneva on Tuesday. Hospitals and clinics in battle zones have been closed or are impossible to reach. Hundreds of ambulances have been lost.

Physicians for Human Rights has complained that both rebels and government forces have attacked hospitals and clinics, jeopardizing the safety and neutrality of medical personnel. Doctors and medics have reportedly been targeted, threatened  and even tortured by the Syrian government, according to rights groups such as Doctors Without Borders and Amnesty International.

“Medics and first-aiders working amid unrest and conflict take enormous risks to provide immediate lifesaving care to the injured and evacuate them to safety. In Syria such risks are magnified by a government policy to target medical personnel and to exact retribution against them,” Amnesty International senior crisis response advisor Donatella Rovera said in June.

The WHO is supporting mobile medical clinics and outreach services and helping to procure hygiene kits and other needed supplies, it said Tuesday. It has been working with the Syrian Ministry of Health as well as the Syrian Arab Red Crescent and other groups.