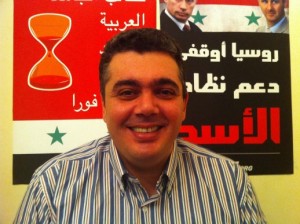 General Security on Monday confiscated the passport of a leading Lebanese Avaaz campaigner for the Syrian opposition at Beirut’s Rafik Hariri International Airport as he was heading to Turkey.

Harous added that no judicial order was issued to ban Tarif from leaving the country, “which goes against any law or regulation.”

Meanwhile, a well-informed source told NOW that Tarif was given a three-day deadline to review the issue at the General Security’s Information Branch.

Tarif is a Lebanese rights activist who is an active Avaaz campaigner called “the most dangerous man in the world” by the embattled Syrian regime.

Avaaz which claims over 15 million members worldwide has reportedly been very active in supporting the Syrian opposition by providing vital emergency relief to communities under siege in Syria, smuggling activists and their families at risk of torture or death out of the country and sheltering key activists in secret safe houses from regime thugs.

Ibrahim was appointed about a year ago as the director-general of the General Security Department. He is known to be very closely associated with Hezbollah.

“We call on the Lebanese government and the relevant authorities to clarify all the circumstances relating to this issue and to launch a probe to determine responsibility and take disciplinary measures against the director general of General Security [Maj. Gen. Abbas Ibrahim] — leading to his sacking, if need be, to stop this ongoing farce,” Jumblatt said in a statement last week

“Wissam Tarif’s passport was confiscated just because he supports the Syrian uprising and is a human and media rights activist,” a statement issued by the organization read.

“How can an activist be banned from traveling by an administrative order instead of a judicial order, and without giving any kind of justification?”

The organization also held the cabinet responsible for the “tragic situation” in Lebanon.

“The continuance of this cabinet is a threat against the constitution and the nature of Lebanon,” the statement added.