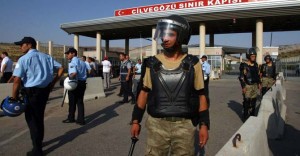 “The Free Syrian Army has taken control of the Bab al-Salam crossing, but Assad’s forces are bombarding our positions from afar,” said Ahmed Zaidan, spokesman for an opposition group called the Higher Council of the Revolution’s Leadership.

Syrian insurgents seized control of the Syrian side of the Bab al-Hawa and Jarablus crossings with Turkey last week, while Iraqi officials said Assad’s forces regained control of one of two border crossings seized by rebels on the frontier with Iraq.

A Turkish official at the border confirmed that Bab al-Salam was in rebel hands. He said the Turkish side of the border gate – which normally operates mainly for commercial traffic from Turkey to the Syria city of Aleppo – remained open but there was no traffic.

“Seizing the border crossings does not have a strategic importance but it has a psychological impact because it demoralizes Assad’s force,” he told Reuters by phone.

“It’s a show of progress for the revolutionaries, despite the superior firepower of Assad’s troops.”

Amr said that his men in Syria had informed him that government forces stationed in Aleppo province were repositioning to Aleppo city, where Syrian troops and armored vehicles have pushed for two days into rebel-held districts.