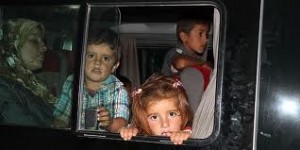 Activists posted video showing locals fleeing Aleppo in cars and minibuses early on Saturday, after the authorities warned they would shell rebel-controlled districts. Most of the fighting was raging in the Salaheddin part of the city, they added, where FSA fighters were massing in large numbers.

Aleppo, Syria’s second city, is dominated by Sunni Muslims, but has a minority population of Christians of various denominations. It had so far largely escaped the country’s brutal 16-month conflict, which has recently developed into a fast-changing guerilla war waged between opposition fighters and the Syrian army, equipped with heavy weapons.

The battle in Aleppo comes after a devastating week for Bashar al-Assad, in which fighting reached the heart of the capital, Damascus and a bomb attack wiped out four members of his military-security command.

Assad’s forces continue to control Syria’s key cities, at least during the day. But they have lost much of the country’s rural hinterland.

The FSA was last week able to capture a series of border posts with Turkey and Iraq, further puncturing the regime’s authority, and is now in charge of large swaths of the northern and eastern periphery.

The FSA has previously reached within 15km of Aleppo. On Saturday activist Mohammad Saeed said dozens of FSA rebels had penetrated deep inside the city. There were reports they had set up checkpoints in some areas.

The fighting was predominantly in the Salaheddin district, Saeed told the Associated Press. Video showed thick black smoke billowing over old buildings. Locals had painted walls with the pre-Ba’athist flag, the symbol of the revolution.

In a further sign of rapid regime erosion, four more Syrian army brigadiers were said to have crossed into Turkey, bringing the number of senior military defectors there to around 100.

Another brigadier, Adelnasser Ferzat, defected to FSA fighters in Aleppo, it was claimed. In a video address in fluent Russian, he urged Moscow to dump Assad and back “freedom” and the rebels’ side.

Activists said as many as 7,000 Aleppo residents had fled in search of safety. Last week’s surge in violence has trapped millions of Syrians, with several areas of Damascus now deserted, and refugees flooding into neighbouring Lebanon. Some 30,000 Syrians – many of them affluent – crossed the border into Lebanon on Thursday and Friday, and were camping in private flats and hotels.

Diplomatic efforts to solve the Syria crisis have been largely overtaken by events on the ground, despite a vote in the UN security council late on Thursday to extend the UN’s monitoring mission inside the country for 30 days.

The international community remains bitterly divided. Iran, Russia and China steadfastly support Assad; Saudi Arabia and Qatar are overtly aiding the rebels; Britain, the US and the EU are calling for a “political transition” and Assad’s immediate departure.

Israel, the region’s most formidable power, meanwhile, announced it would consider military action to prevent Syria’s chemical weapons and missiles arsenal from falling into the hands of Hezbollah, Assad’s Shia Islamist allies in next-door Lebanon.

“I have instructed the military to increase its intelligence preparations and prepare what is needed so that … (if necessary) … we will be able to consider carrying out an operation,” the defence minister, Ehud Barak, said.