Futures slid as much as 0.6 percent in New York, declining for the first time in four days. Wen said “difficulties” may persist for a while, according to the official Xinhua News Agency. Abu Dhabi started exporting its first crude through a pipeline that bypasses the Strait of Hormuz, shipping supplies to a refinery in Pakistan. Iran has threatened to shut the waterway, a transit route for about a fifth of the world’s oil cargoes, in response to sanctions on its nuclear program.

“It’s not surprising that we’re seeing some selling on top of the somewhat gloomy picture Wen Jiabao painted,” said Victor Shum, the managing director of IHS Consulting in Singapore. “News that this Abu Dhabi pipeline is in operation certainly helps relieve some of the worries over tanker blockage at the Strait of Hormuz.”

Brent crude for August settlement was at $102.54 a barrel, up 14 cents, on the London-based ICE Futures Europe exchange. The contract expires today. The more-active September future was at $101.45, up 3 cents. The European benchmark’s premium to West Texas Intermediate was at $15.78, from $15.30 on July 13.

Oil in New York is declining as futures approach a so- called “death cross” technical formation, according to data compiled by Bloomberg. The 100-day moving average, at $96.16 a barrel today, has almost erased a premium to the 200-day mean at $96.07. Investors typically sell contracts when a shorter moving average falls below a longer one. Crude has resistance along the 50-day average at $87.18.

In China, Wen’s comments followed data that showed Asia’s largest economy had the weakest expansion in three years as Europe’s fiscal crisis sapped exports and a crackdown on property speculation curbed domestic demand. Even so, the pace of economic expansion is within the targeted range and government measures to stabilize growth are “bearing fruit,” he said yesterday, according to the report from Xinhua.

The country processed oil at the slowest rate in eight months in June. Refining slid to 8.79 million barrels a day last month, the least since October and down 3.4 percent from May, according to July 13 data from the National Bureau of Statistics.

“News of China’s slowing growth is affecting markets,” Robin Mills, the head of consulting at Dubai-based Manaar Energy Consulting and Project Management, said in a telephone interview yesterday. “The opening of the Fujairah pipeline that bypasses the Strait of Hormuz also means improved security.” 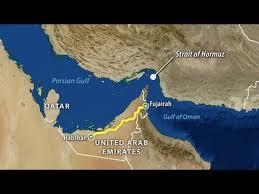 The crude line built by Abu Dhabi, the capital of the United Arab Emirates and holder of more than 90 percent of its oil, will work as an export route that avoids Hormuz at the mouth of the Persian Gulf. The system stretches from Abu Dhabi to the neighboring sheikhdom of Fujairah on the Gulf of Oman. The link was loading its first shipment of 500,000 barrels to the Pakistani plant, Mohamed Bin Dhaen Al-Hamli, oil minister for the U.A.E, said yesterday at a ceremony to inaugurate the network.

The average price for regular gasoline at U.S. filling stations fell 6.77 cents in the past three weeks to $3.4103 a gallon, according to Lundberg Survey Inc. That is down 20.47 cents from a year earlier. The survey covers the three weeks ended July 13 and is based on information received from about 2,500 stations by the company.