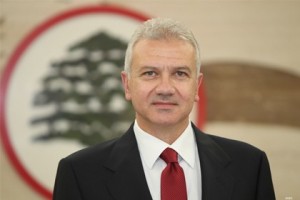 The other contenders, Jean Mofrej and Naim al-Ajaili, received 311 and 94 votes.

Charbel told reporters that the Koura by-elections represented a “triumph of democracy” and congratulated the Internal Security Forces and Lebanese Army for the measures they adopted during the election process.

The special election in Koura was held on Sunday morning to elect a successor for Lebanese Forces bloc MP Farid Habib (1938-2012), who passed away on May 31 after a struggle with an illness.

Following the announcement of the preliminary results last night, Lebanese forces leader Samir Geagea said: “The results speak for themselves and provide an indication on how the the results of the 2013 elections will be.”

Geagea added: “This is a victory for Koura and March 14 alliance and a defeat for SSNP and all March 8 alliance. “

The preliminary results were slightly different from the official results; 12507 for Karam against 11262 for Walid al-Aazar