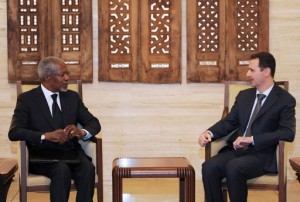 Syrian President Bashar Assad has discussed the possibility of forming a transitional government for his country as proposed by an international conference in Geneva last month, envoy Kofi Annan said Wednesday.

Annan, the U.N.-Arab League envoy to Syria, said that during his discussions with Assad in Damascus this week the Syrian leader proposed someone who could serve as an interlocutor for the regime as it explores ways of forming a transitional government with the opposition.

Activists estimate that 17,000 people have been killed in the Assad regime’s crackdown on a popular uprising that began in March 2011. As the conflict has dragged on, the increasingly armed rebellion appears to be getting more radicalized and violent, complicating the goal of a peaceful resolution or transfer of power.

Annan spoke to reporters in Geneva after a private videoconference session with the U.N. Security Council in New York. The envoy did not identify the person whose name Assad put forward, but said: “He did offer a name and I indicated that I wanted to know a bit more about that individual. So we are at that stage.”

In his closed-door briefing, Annan said he and Assad exchanged views on “how a political transition could be negotiated and unfold — which, I indicated, I believe should be able to be completed within six months to a year,” according to a transcript posted on un-report.blogspot.com and confirmed by a U.N. diplomat.

“President Assad indicated that this could be possible if conditions were correct,” Annan said.

He said the key is appointing “an effective empowered interlocutor” with access to the president who is authorized to negotiate on the basis of the six-point plan and the guidelines for a transition and would be viewed “with confidence by those he or she must engage.”

Annan urged the 15-nation council, the most powerful arm of the United Nations, to send a message to the Syrian government and the opposition that there will be “consequences” if they don’t comply with demands for an immediate cease-fire, Britain’s U.N. Ambassador Mark Lyall Grant said.

“He called for the Security Council members to put aside their national interests and to put joint and sustained pressure on both parties with clear consequences for non-compliance,” Lyall Grant told reporters after the meeting.

To accomplish that, he said, Western nations would introduce a draft resolution threatening sanctions against the Syrian government and opposition if Annan’s six-point peace plan and guidelines for a Syrian-led political transition adopted in Geneva last month are not implemented. The proposed resolution would be under Chapter 7 of the U.N. Charter which can be enforced militarily.

Russia and China, key allies of Assad and veto-wielding council members, have blocked repeated attempts by the United States and its European allies to even threaten “consequences” — a diplomatic code word for sanctions.

“Kofi Annan did not ask us to apply sanctions. He just said that the Security Council should speak in a united and single voice and make sure to send a signal that its suggested recommendations and actions have to be implemented,” Pankin said. Russia wants “consolidated pressure on all parties,” he said, and it believes that any militarily enforceable resolution “is the last resort.”

Two Syrian opposition delegations visited Moscow this week, raising hopes that Russia could be pushed to accept Assad’s ouster but Syrian National Council head Abdelbaset Sieda said he saw “no change” in Moscow’s stance after meeting with officials including Foreign Minister Sergey Lavrov. Sieda said Russia’s resistance to international intervention in the conflict was bringing misery and “suffering” to the violence-torn country.

Pankin told reporters that at the Moscow meetings, “what we heard from many factions and many representatives of the opposition is they are not ready for diplomatic or political dialogue. They don’t trust the current government. They would continue fighting, which is very discouraging.”

Annan’s peace plan, submitted in March and accepted by Assad’s government, called for an immediate cease-fire and withdrawal of heavy weapons from populated areas by the Syrian government to be followed by a cessation of hostilities by the opposition. It led to an April 12 cease-fire agreement, which has failed to hold.

The U.N. sent a 300-strong unarmed observer mission to Syria for 90 days to oversee the cessation of violence and monitor implementation of the Annan plan. The team was forced to withdraw from key conflict areas because of escalating fighting and the council must decide what to do about extending its mandate, which expires on July 20.

At a conference in Geneva on June 30, Russia insisted that any political transition must have the “mutual consent” of both Assad’s government and the opposition, essentially handing a veto on the peacemaking process to both sides.

On the eve of Annan’s briefing Wednesday, Russia circulated a draft resolution to Security Council members that would extend the U.N. observer force mission in Syria for three months but refocus its activities on trying to achieve a political solution to the conflict.

The draft calls for “the urgent, comprehensive and immediate implementation” of the Annan peace plan and the guidelines for a political transition. It says the council will assess implementation and “consider further steps as appropriate.”

France’s U.N. Ambassador Gerard Araud said the Russian draft has “no teeth” to ensure implementation of the Annan plan and the guidelines for a political process which is why a Chapter 7 resolution threatening sanctions is critical.

A Western-backed text circulated by Britian late Wednesday and obtained by AP would order Syrian authorities to “visibly and verifiably” implement commitments in the two previous council resolutions to withdraw troops and heavy weapons from population centers in order “to facilitate a sustained cessation of violence.”

If Syria does not comply within 10 days, it says the Security Council will impose non-military sanctions.

The British draft would only extend the observer mission for 45 days and change its focus to increasing support for dialogue between the government and opposition and promoting political talks and respect for human rights.

Diplomats said council experts would discuss the rival texts Thursday morning before a closed meeting of ambassadors in the afternoon.

Annan briefed the council on his talks with Assad in Damascus and his visits to Iran and Iraq. He told reporters in Tehran and Baghdad on Tuesday that Assad agreed to a plan to contain the bloodshed in the most violent areas of Syria step-by-step and then expand the operation to the whole country.

Annan said Wednesday, however, that these steps would be incorporated into the broader six-point plan that he has insisted on all along.

“Within that framework the discussion we had was to take action at those locations where one has such horrific violence that you can’t get in humanitarian assistance, people who are trapped couldn’t get out, and work out cease-fire arrangements at these localities with possibly the help of UNSMIS,” Annan said, using the acronym for the UN truce mission.

“This does not free anybody from the broader obligation of the cease-fire as indicated in the plan,” he said.

In his closed-door briefing, Annan painted a grim picture of Syria today, saying the situation “has gone from bad to worse” with entire families massacred, neighborhoods shelled into ruins, several hundred thousand people displaced, many civilians trapped in combat zones and thousands “detained or disappeared without a trace and reportedly tortured.”

According to the transcript, he said government campaigns to root out opposition strongholds have intensified, with civilians being killed and injured “in appalling numbers.”

“Despite repeated promises to comply with its obligation to cease the use of heavy weapons, the government has increased its operations with shelling, mechanized infantry and the use of helicopter gunships, including in population centres,” Annan said. “Opposition elements have also intensified their attacks against government forces and installations.”