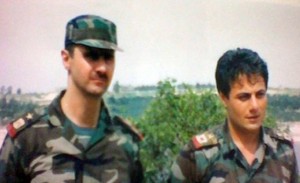 Beirut, Lebanon- A commander in Syria’s elite Republican Guards, who was a member of the Damascus aristocracy and a close friend and contemporary of President Bashar al-Assad, was reported on Thursday to have fled the country and defected.

If confirmed, the defection of the commander, Brig. Gen. Manaf Tlass, would be the first from within the gilded circle around the president since the uprising against him began in March 2011, and the kind of embarrassing departure long anticipated to indicate that the government’s cohesion was cracking.

“Manaf is one of the regime’s main figures,” said Bashar al-Heraki, a member of the Syrian National Council, the umbrella political group in exile. Mr. Heraki, who sits on the council’s military coordination committee, said General Tlass would soon publicly declare his defection, but he declined to confirm reports that the general was in Turkey.

“It is a negative sign for this regime,” Mr. Heraki said. “It has started to lose control.”

Col. Riad al-Assaad, the head of the Free Syrian Army in Turkey, a group of defected officers, said on Al Jazeera, the Arabic satellite channel, that General Tlass had fled to Turkey.

The director of the Syrian Observatory for Human Rights, an opposition group in Britain with a network of contacts in Syria, said at least three people there had confirmed that General Tlass had left, but it was not certain that he had defected. “If he does announce it, it will be the first real defection from the regime,” said the director, who goes by the pseudonym Rami Abdul-Rahman for reasons of personal safety.

General Tlass is the son of a more prominent general, Mustafa Tlass. The elder General Tlass was defense minister from 1972 to 2004 and was especially close to President Hafez al-Assad while he created the repressive system that controls Syria.

As one of the government’s most prominent Sunni Muslims, the elder General Tlass helped to disguise the fact that Hafez al-Assad relied on an inner circle composed mostly of his own minority Alawite sect.

The elder General Tlass was also said to have played a key role in the anointment of Bashar al-Assad as his father’s heir after his firstborn son, Basil, died at the wheel of his Mercedes in 1994.

At the official memorial service for Basil, the elder General Tlass was quoted as saying that he could see the light of Basil’s eyes shining from Bashar’s. Bashar soon became the heir apparent, ending his medical career and enrolling for military training, where the elder General Tlass promoted him and where his elevation into the officer corps coincided with that of Manaf’s.

In the second generation of the elite, families with two sons often divided their roles, with one going into business and the other joining the armed forces. It was true of Bashar’s first cousins, the Makhloufs, and it was true for the Tlass family.

Firas Tlass became a business tycoon, while Manaf — a charismatic figure — was promoted to a one-star general in the Republican Guards, one of the core units used in attempts to crush the current uprising. Maher al-Assad, the president’s younger brother, heads the praetorian force where Manaf served.

The president and Manaf were sometimes seen eating out together in Damascus.

“He’s a close friend to Bashar,” Mr. Heraki said. “So it is not only a strong strike against the regime, but the strongest message yet to Bashar that he is no longer safe, and a message to other officers thinking about defecting.”

Many activists suggested that the symbolic value of the reported defection for other Sunni Muslim officers was its most potent aspect.

Other opposition figures were less charitable, suggesting that General Tlass fled only to try to save the family’s substantial fortune as the government collapses.

The Tlass family came from Rastan, a predominantly Sunni Muslim city near Homs that has been under assault as a center for defecting officers. As the siege intensified, the Tlass family gradually left the country. Mustafa Tlass was said to have left for Paris in March, citing the need to seek medical treatment, while Firas was believed to be pursuing his business interests from the United Arab Emirates. He has kept a low profile, declining interview requests.

Manaf was believed to have at least one son enrolled at the American University of Beirut, where his wife also lived, and the reported defection came after the school year had ended.

On his blog, Syria Comment, Joshua Landis, the director of Middle East studies at the University of Oklahoma, said Manaf had been given the task of quieting uprisings in the Damascus suburbs of Harasta and Douma.

He had successfully negotiated a disengagement agreement with opposition leaders there, but was then shunted aside by Alawite leaders who wanted a ruthless strategy, Mr. Landis wrote, and the frustration drove General Tlass to leave. That bloody repression has only fueled the uprising in both places.

Word of General Tlass’s reported defection came as the officer commanding United Nations monitors in Syria, Maj. Gen. Robert Mood of Norway, said that violence had reached “unprecedented” levels, making it impossible for his unarmed observers to resume their work, which was suspended last month. The Security Council will decide in coming days whether to renew the monitor mission’s mandate, which expires on July 20.

So far, Mr. Assad has shown no willingness to heed calls for a cease-fire. In the third installment of an interview published in Turkey’s Cumhuriyet newspaper this week, he reiterated his contention that he was battling a war against terrorists and that he would not be in power if he were not popular among Syrians. His enemies, he said, had “all miscalculated.”

Mr. Assad has defied numerous predictions that he would fall victim to his own increased isolation and a torrent of negative publicity about his government’s brutality.

In what could become a new source of embarrassment for both Mr. Assad and his adversaries, the online group WikiLeaks said Thursday that it would soon begin releasing a trove of more than 2.4 million e-mails between Syrian politicians, government officials and companies dating from 2006 until March of this year. In a statement, the group said it aimed to “shine a light on the inner workings of the Syrian government and economy.”