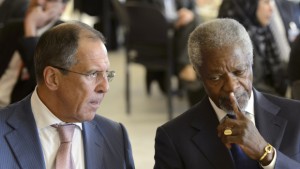 The much-hyped plan to end Syria’s misery and guide its transition to democracy appears to have fallen flat despite the endorsement of Western powers.

Russia’s objections at an international conference Saturday in Geneva gutted the most stringent conditions on a potential interim leader in Damascus. The Syrian opposition quickly dismissed the proposal as a waste of time and with “no value on the ground.”

The U.S. and its allies insist the plan will force Syrian President Bashar Assad from power. Russia disagrees, and Assad is unlikely to acquiesce.

It all leaves U.N. envoy Kofi Annan’s efforts to end 15 months of bloodshed no better off than before. More than 14,000 people have died in the uprising against Assad’s rule.

There’s an urgent need for a solution because the conflict is threatening to spill across borders after Syria shot down a warplane from neighboring Turkey, which responded by setting up anti-aircraft guns along the frontier.

Western nations needed to win Russia’s backing for the plan, so they dropped the demand that “those whose continued presence and participation would undermine the credibility of the transition and jeopardize stability and reconciliation” would be excluded from the process.

That was widely understood to mean Assad and much of his inner circle. While the West insisted, Assad’s main allies in Moscow resisted intensely.

As a result, the plan contains no criteria for excluding anyone from the transitional government and leaves its composition entirely up to the “mutual consent” of Assad administration and the fractured opposition. Both sides presumably have unlimited veto power over members of the interim government, which could prolong the stalemate and keep Assad in charge.

U.S. and Western officials acknowledge the possibility of that scenario. But they insist that the “mutual consent” language puts the opposition on equal footing with Assad in determining who will be part of the governing body.

Annan said he could not imagine that the Syrian people would choose anyone with blood on their hands to lead them.

U.S. Secretary of State Hillary Rodham Clinton, going further, said the plan requires Assad to leave because there is no chance he can meet the “mutual consent” standard.

“What we have done here is to strip away the fiction that he and those with blood on their hands can stay in power,” she said.

Yet, as Russian Foreign Minister Sergey Lavrov pointed out, the plan excludes no one. Nor does it give anyone without a vested interest any authority to suggest who might or might not be acceptable.

That’s why Assad’s foes are skeptical, at the very least.

“The country has been destroyed, and they want us then to sit with the killer?” asked opposition figure Haitham Maleh.

Bassma Kodmani, a Paris-based spokeswoman for the main opposition group, the Syrian National Council (SNC), said the agreement was “ambiguous” and lacks a mechanism or timetable for implementation.

Western officials say they expect Russia and China, which have blocked U.N. action on Syria, to make the case to Assad that he needs to step down for the good of his country. They hope, as Clinton said Saturday, that Assad will “see the writing on the wall” and remove himself from the equation.

So far, though, neither has shown any inclination to back away from defending Assad.

Clinton and her Western counterparts will take the Annan plan to a meeting of the “Friends of Syria” group in Paris on Friday to get a broader endorsement of the deal. This, they hope, will raise the pressure on Russia and China to convince Assad of the need to get the transition started.

Should that fail and the process remain stalled, they intended to return to the U.N. Security Council for a resolution that would compel compliance.