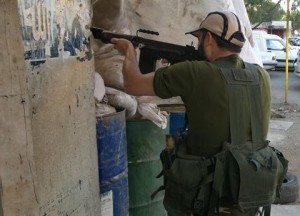 Nowhere is the stress exerted on Lebanon by the Syrian crisis more apparent than in Tripoli, the country’s second city.

Like Syria’s other neighbours – Turkey, Iraq and Jordan – Lebanon has absorbed thousands of refugees fleeing from the conflict now raging on the other side of the border.

But unlike the other countries, Lebanon risks being plunged into sectarian strife, possibly even civil war, by the strains inflicted on its own delicate internal situation by the Syrian crisis.

If there is a spark that sets off a wider conflagration in the country, it is most likely to come from Tripoli, where blood has already been spilled.

The majority of the city’s 500,000 or so inhabitants are Sunnis, most of whom naturally side with the uprising across the border in Syria, which has taken root mainly in the country’s Sunni areas.

But there is a small but tough minority of Alawites, perhaps 35,000 strong, mainly concentrated in the hilltop Jebel Mohsen quarter.

They share the same obscure faith as the ruling clan of Bashar al-Assad in Syria – an occult offshoot of Shia Islam – and most of them strongly support the Syrian regime.

It is not a theoretical alliance.

During the Syrian military presence in Lebanon (from 1976 until 2005) Alawite leaders in Tripoli worked closely with the Syrians and fought on their behalf in various proxy battles over the years. 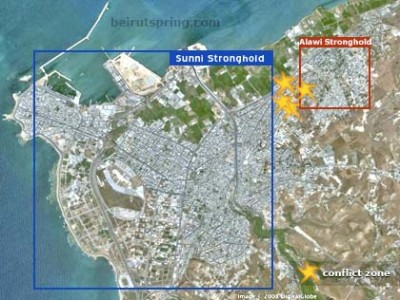 The main Lebanese Alawite faction, the Arab Democratic Party led by Rifaat Eid, is strongly linked to Damascus and is widely believed to receive arms and even instructions from the regime.

Twice already this year, there have been bouts of fighting along a civil war front line between Jebel Mohsen and Bab al-Tebbaneh – the adjacent Sunni district.

More than 20 people have been killed in clashes which nobody doubts were related to the Syrian conflict, though there were conflicting recriminations.

Sunnis accused the Alawites and Damascus of stirring up the trouble to divert attention from Syria’s internal struggle and to warn the Sunnis against allowing Tripoli to become a rear base for the Syrian rebels, which it effectively is.

Alawites accused the Sunnis of trying to impose a Salafi (fundamentalist) emirate and of arming and financing the Syrian Sunnis. Rifaat Eid even suggested that the only solution was to invite the Syrian army in to impose order.

Most parts of Tripoli are clearly badged with the symbols of the struggle.

In many areas, the black-white-and-green banner of the Syrian revolution flutters, in places more prominently than Lebanon’s own flag.

But in Jebel Mohsen, the posters are of Mr Assad and his father, the regime founder Hafez al-Assad, some of them featuring Rifaat Eid.

Buildings on and near Syria Street, which runs along the front line just on the Sunni side, are pocked and battered by the various bouts of fighting.

People here are in no two minds about who is to blame.

“Every time we open up and try to work, they shoot at us again, so people close down again and run away,” said Imad, a coffee shop owner.

“It’s all down to Bashar al-Assad. He promised that if Syria doesn’t have security, he’ll set fire to the whole Middle East. Now he’s started with Lebanon, then it’ll be Iraq, Jordan, Turkey.

“He’s killing more than 100 of his own people every day. We’re with the people who are being killed for no reason,” Imad added.

There are widespread fears that more clashes between Alawites and Sunnis in Tripoli could spread along the sectarian and political fault lines that run through the country.

The Alawites may be a small minority, but they are connected to a Syrian-backed alliance which includes the Shia factions Hezbollah and Amal, as well as some Christian groups – among them the northern warlord Suleiman Franjieh in nearby Zgharta.

“All the elements of a civil war are present,” said Samer Annous, a university lecturer and civil society activist.

“Poverty, rage among many people over things that are happening in Syria, sectarian divisions, corruption in government, the total collapse of the whole system.

“It’s just a pity to see our city again having to pay for the wars of others, regional powers including the Gulf states and the Syrians,” Mr Anbnous said.

There is a widespread perception that a proxy struggle is already taking place, with Saudi Arabia and Qatar pouring funds into Tripoli through a proliferation of Salafi Islamist groups which have become increasingly active on the ground.

“It seems that there is a kind of competition between Qatar and Saudi Arabia to control the Sunni street in Lebanon, and especially in Tripoli,” said Ziad al-Ayyoubi, another civil society activist.

“This is also directly related to the Syrian revolution. Qatar is the lead country in the Gulf supporting the Syrian rebels. It seems that it is using Tripoli and north Lebanon to get access to Syria. There are a lot of expensive new weapons on the front line here, and they’re not left over from the civil war.”

One of the best-known Salafi leaders in Tripoli, Shaikh Daai al-Islam al-Shahhal, also stressed the regional dimensions of the struggle.

“The end of the criminal regime in Syria is absolutely inevitable,” he said.

“That will deal a huge blow to the Safavid [Iranian] project of which it is a cornerstone. It will shake the Iranian and Iraqi regimes, and the allies of the Syrian regime in Lebanon.”

Chief among those allies is Hezbollah, the most powerful force in Lebanon, including the Lebanese army.

Hezbollah’s reaction to a Syrian collapse would set the frame for what happens next in Lebanon.

Mr Shahhal said he believed a conflict was not inevitable.

“I think some voices within Hezbollah organisation will call for preemptive steps to overturn the table in Lebanon in security terms.”

“But there will also be wiser and more aware voices, which may prevail, arguing that Hezbollah should adjust to the new Lebanese reality, and content itself with being one of the effective political parties in Lebanon.

“If they turn back [from the Iranian project], there would be no problems between them and us,” Mr Shahhal said.

Hezbollah has so far been extremely restrained in its attitudes on the ground in Lebanon, while strongly supporting the Assad regime politically.

There is no impression at present that it is spoiling for a fight, and when 11 Lebanese Shia pilgrims were abducted by Sunni rebels in northern Syria two months ago – they are still being held – it discouraged its supporters from making trouble to press for their release.

But one man who believes civil war is already here is Hussein Ali, an 88-year-old Alawite shopkeeper who has lived in Tripoli all his life.

One of his shops was recently attacked and smashed by Sunni thugs who he believed belonged to organised Salafi groups, part of a campaign that has sent many Alawites fleeing from mixed areas.

But he refuses to be intimidated, and has reopened.

He is fiercely critical of the local Alawite leaders, who he believes are encouraging their followers on a suicidal course.

“The Alawite community here is small – they’ll get swallowed up like candy,” he said.

“When the politics change, and the support from Syria goes, Hezbollah’s influence will go too. The Alawites here seem to believe the Assad family in Syria is there forever. They’ve made a mistake. But that doesn’t mean they deserve to be killed.”