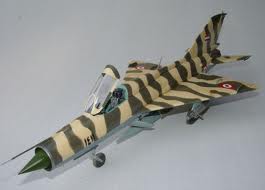 A Syrian MiG 21 fighter jet landed in Jordan on Thursday in what opposition activists said was the first defection involving an aircraft since the start of a 15-month-old uprising against President Bashar al-Assad.

Syrian state television said communication was lost with a plane of the same model at 10:34 a.m. while it was on a training mission near the southern border with Jordan.

Updates: The pilot has asked for political asylum, according to Reuters citing a Jordanian minister

Here are a few unconfirmed details about the breaking defection story.

#BREAKING: A source in the Free Syrian Army says that a Syrian pilot defected and more to come #Syria #Assad #Damascus

#BREAKING: A source in the Free Syrian Army says the final destination of the defected pilot could be #France – Radio Sawa #Syria #Assad

A Syrian MiG-21 piloted by Colonel Hasan Mar’e Hammade is reported to have defected and landed in a military base in Jordan, after the Syrian regime reported losing contact with the aircraft at 10.34am ‘near the southern region’.