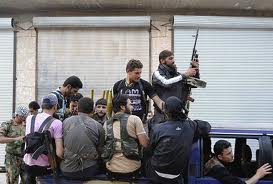 Approaching his 18th birthday, Hamza, a merchant sailor from Syria, resigned himself to the fate awaiting him when he reached adulthood: A year and a half of mandatory military service.

That altered the plan for Hamza, and for a growing number of young Syrians who are dodging the draft out of fear that military service will force them to kill their countrymen — or get killed themselves.

“I couldn’t go because the army is supposed to protect people, but all this army does is protect Assad,” said Hamza, now a wispy-bearded 19-year-old with thick biceps from his work at sea. He fled Syria this year to Tripoli, a city on Lebanon’s Mediterranean coast. Unable to work, he lives in hiding in a small apartment here with six other draft-dodgers.

Young Syrians have long avoided the draft by traveling abroad, cooking up medical excuses or using connections and bribes to get their names off the rolls. But anti-regime activists in and outside Syria say the number has shot up during the 15-month conflict that the U.N. says has killed more than 9,000 people.

Some hide out in opposition areas in Syria, avoiding checkpoints where they could be jailed or conscripted. Others flee the country, opting, at least for now, for an impoverished existence far from their families.

The extent of all this is hard to gauge since the Syrian government does not comment on its military. But in a hint that the army is under strain, Assad issued an amnesty this month: He gave draft-dodgers inside the country 90 days to report for duty without punishment, and 120 days to those abroad.

The government has not said how many have accepted the offer.

So far, the drop in conscripts has not noticeably lessened the state’s advantage over the opposition Free Syrian Army, largely because draftees are less committed than professional soldiers.

“The guys they call up now are not the guys who are going to stick by them,” said Joseph Holliday, an analyst at the Institute for the Study of War who is studying the Syrian army. “Anyone they can get to fight for them loyally is already taking part.”

Others warn that efforts to replace draft-dodgers with regime loyalists will exacerbate sectarian strife. The opposition is mostly Sunni Muslim, while Assad’s regime and security forces give outsized power to Assad’s sect, the Alawites.

Both sides use sectarian appeals to rally their forces, raising the risk that Syria’s violence could mirror that which has torn apart its neighbors Lebanon and Iraq in recent decades.

“This revolution, which is turning into a civil war along sectarian lines, is only going to become more sectarian as time goes on,” said Syria expert Joshua Landis at the University of Oklahoma.

The slaughter of more than 100 people two weeks ago in the Sunni area of Houla raised the specter of sectarian massacres, with local activists accusing Alawite thugs of killing villagers at close range after heavy government shelling. The U.N. condemned the killings but did not overtly blame the regime.

Draft-dodgers particularly hope to avoid getting caught up in this type of violence.

“Even if you support the government, you know the army is killing people, so given the choice to go or not, you won’t go,” said Rami Jarrah, who has four draft-dodgers in his office at the Activists News Association in Cairo.

Standard military service is 18 months for a man over 18 who is not an only son. Only sons don’t serve. University and technical school students can delay their service and do slightly less time.

Syrians born abroad can pay $500 not to serve, and those with residency in other countries can pay $4,000 to $5,000, depending on their location.

But healthy, Syrian-born men living at home have no way out.

Such was the fate of one of Jarrah’s colleagues, a 24-year-old from Banias, who graduated from university just before the uprising began. He bribed the draft office for another short-term student exemption but was told last October that he had to serve.

“They said there was no way out of it because of what is going on, so I left the country,” he said, declining to give his name to protect his family in Syria. Others, like Hamza, agreed to have only their first names published.

Like many draft-dodgers, he said his older relatives had served and that he would have too in normal times.

“But now the army is killing its own people, so you have to refuse to go,” he said.

Most draft-dodger exiles say they won’t return to Syria until the regime falls, and many won’t renew expired passports, fearing their embassies will confiscate them until they report for duty.

This leaves them stranded abroad, sometimes as risk of arrest and deportation.

Maher, a roommate of Hamza, dragged his four-year university program out to eight years to avoid the military, but was told last year when he tried to renew his passport that he had to enlist. Weeks later, he fled to Lebanon, afraid the military would make him kill other Syrians.

“How can an army that was built to fight Israel and liberate the Golan Heights be the same one that is now killing its own people?” said Maher, 27.

Lebanon has close ties to Syria, and many Syrian dissidents fear harassment or arrest. The U.S. Embassy in Lebanon said recently it was “deeply troubled by reports of disappearances, arrests and intimidation of Syrians in Lebanon undertaken by the Syrian regime and its supporters.”

“Refugees, dissenters, and deserters who renounce violence should be protected,” it said.

Even some Syrians who can legally avoid the draft now refuse to.

Maher’s friend Abdel-Rahman Qassem, 21, lived for years in the United Arab Emirates and planned to establish residency there and buy his way out.

“That was before the revolution,” he said. “But when it started, I stopped trying because I knew the money would go to the regime, so I wouldn’t pay.”

Not all draft dodgers are active in the anti-Assad struggle, but many said they now spend most of their time trying to help the opposition in Syria.

“If I had a way to do it, I would join the Free Syrian Army,” Qassem said. “At least that way I’d feel I’m serving my country.”