Analysis: A turning point in Lebanon

by yalibnan
653
Something remarkable is happening in Lebanon. The open invitation Syria once had to dictate its will on Lebanon has apparently come to an end, much to the dismay of Hezbollah and its allies.
Share: 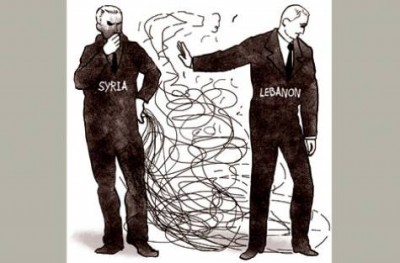 Lebanese President Michel Sulaiman’s recent visit to Saudi Arabia, his meeting with King Abdullah Bin Abdul Aziz and his lunch with Foreign Minister Saud Al Faisal speaks volumes about how Lebanon is struggling to escape Syrian tutelage at a time when pro-Syrian Lebanese parties are aggressively trying to drag Lebanon into Syria’s current mess. Had Syrian officials got their way, then this meeting would have never happened at a time when Syrian-Saudi relations are at an all-time low. Syrian officialdom, no doubt, would have preferred that the Lebanese President visit Damascus instead to hammer out the recent crisis in Lebanon — as customarily done since 1975.

The luncheon hosted by the Saudi minister, which was attended by ex-prime minister Sa’ad Hariri, was also a source of alarm for the Syrians, and of course, so was Prime Minister Najeeb Mikati’s visit to Istanbul where he discussed the Lebanon file with Turkish Prime Minister Recep Tayyip Erdogan. The declared objective of the Lebanese-Saudi Summit was to prepare for the National Dialogue Conference that Sulaiman had called for at Baabda Palace, which is due to kick off on June 11. This is aimed at preventing Lebanon from sinking into sectarian strife after deadly fighting took place in Tripoli between the Jabal Mohsen neighbourhood, which is pro-Syrian regime, and the Sunni Bab Al Tabbaneh neighbourhood, which supports the Syrian revolt. From Saudi Arabia, Sulaiman headed to Kuwait, another Gulf country that has turned against the Syrian regime over the past year, with the aim of convincing its leaders to revoke their travel warning to Lebanon, ahead of the summer season that is reliant on Gulf tourists.

Coinciding with the Lebanese president’s efforts was a speech by Hezbollah leader Hassan Nasrallah, on the 23rd anniversary of the death of Ayatollah Khomeini, delivered at the Unesco Palace. Earlier last week, Nasrallah had shown rather striking moderation, thanking his political opponent Hariri — rather than bashing him as Hezbollah has customarily done — while calling on his followers to refrain from street violence after the abduction of 11 Lebanese hostages, all Shiite pilgrims, in the northern Syrian city of Aleppo. On Friday, however, Nasrallah addressed the captors — without identifying them — saying military action was an option if a peaceful solution was not found for the crisis. The National Dialogue, which was called for by Saudi Arabia, was accepted by Hezbollah, and Nasrallah even went a step further, hoping that no party would boycott it. Then came the clashes on Saturday, between pro-Syrian and anti-Syrian Lebanese, which left at least 15 people dead and which threatened to bring all reconciliation attempts back to square one.

All of this means something remarkable is happening in Lebanon and it plays out in favour of the Lebanese, if invested in wisely. The open invitation Syria once had to dictate its will on Lebanon has apparently come to an end, much to the dismay of Hezbollah and its allies. What then will the Lebanese discuss at the National Dialogue Conference and to what extent — if any — does Syria want this conference to succeed if it won’t have a final say on its outcome? The list of “high-priority topics” is long indeed. They have the hostages to deal with, the security situation in Tripoli, the distance from Syria that the international community is imposing on the Lebanese state, the future of the Najeeb Mikati cabinet, Lebanon’s controversial electoral law and, of course, the issue of Hezbollah’s arms.

An estimated 60 to 70 per cent of the country’s public posts are vacant, leading to a near paralysis of the state, as most of these appointments have to abide by the delicate rules of sectarianism and political affiliations between Hariri’s March 14 and Hezbollah’s March 8 Coalition. In the past, Syria used its influence in Lebanon to make sure that Hezbollah’s arms were not mentioned at any Lebanese round-table talks, but today it no longer has the leverage to make things happen at will in Lebanon. No dialogue would be complete if Hezbollah’s arms are not on the table, and no reconciliation is possible in Lebanon if these arms remain autonomous from the Lebanese state, regardless of what Syria and Iran want for Lebanon.

This is a golden opportunity for Lebanese political figures to sit down and solve their problem just like the Palestinians did in early 2011, when they invested in the reality that both Egypt and Syria — the traditional patrons of Hamas and Fatah respectively— were too busy to meddle and obstruct the internal politics of the Palestinians. The real problem for the Palestinians was Syria and Egypt, not Fatah and Hamas. As a result, freed from outside Arab pressure, the Palestinians struck a historic deal, and the Lebanese can (if they pull the right strings) do the same next week at Baabda. Lebanon deserves a better future, no doubt, and that can only happen if and when its politicians start acting as Lebanese statesmen, rather than proxies or stooges for the Saudis, Iranians and Syrians.

Sami Moubayed is a Syrian historian,  university professor, and editor-in-chief of  ‘Forward’ magazine.